Watch video: Fire breaks out in a running vehicle in Gwalior

A video of the incident also surfaced on social media.
FP News Service 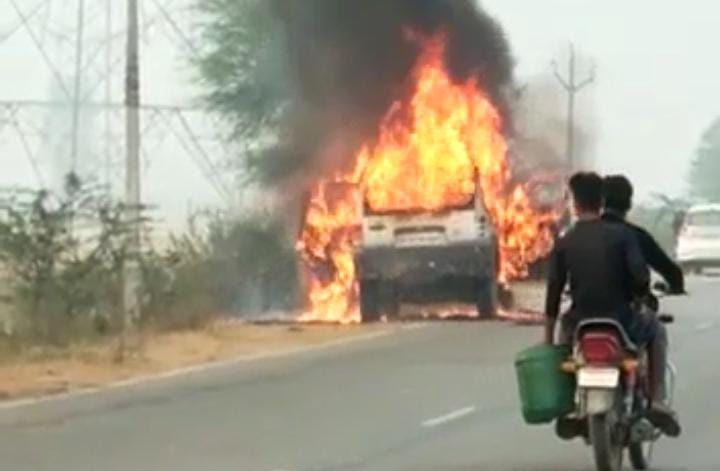 Gwalior (Madhya Pradesh): A sudden fire broke out in a Scorpio on Dabra-Bhitarwar road in Gwalior on Monday.

A video of the incident also surfaced on social media. The two passengers travelling in the vehicle were evacuated safely out of it.

According to the eye witness, as soon as the vehicle caught fire, the driver immediately parked the vehicle at the road side and took the passengers out of it.

Bitwarwar police station in charge Rajkumari Parmar said that on getting the information about the incident, the police rushed to the spot and called the fire brigade.

Nonetheless, the vehicle turned into ashes before the fire brigade reached there. According to reports, the fire broke out because of short circuit.

Madhya Pradesh: Fire broke out in a running Scorpio on Dabra-Bhitarwar road in Gwalior on Monday. No casualties have been, however, reported in the incident. pic.twitter.com/w8lKssWDSn

Madhya Pradesh: Minor girl raped on her way back home in Indore
Advertisement