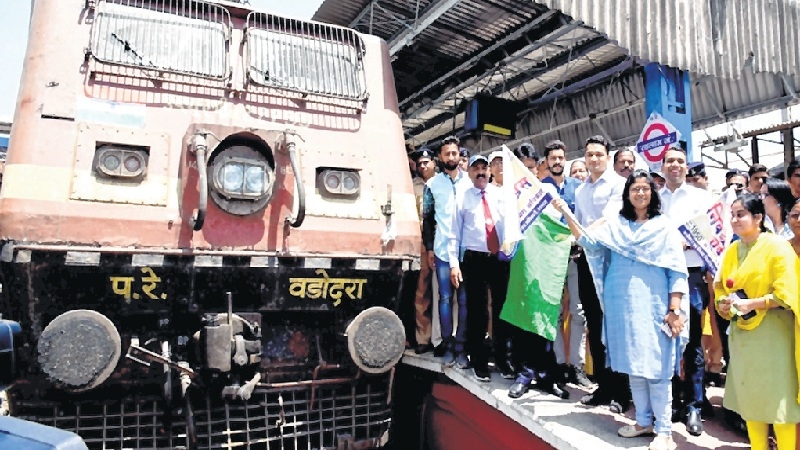 As part of voter awareness campaign for Lok Sabha election, Election Commission of India and Indian Railways have come together to use four long distance trains to carry voter awareness and motivational messages. The train displays important contact details for citizens including the voter Helpline number and National Voters’ Services Portal besides motivational messages urging them to vote.

As soon as the train arrived here on Wednesday noon, district election officer Ruchika Chauhan, DRM RN Sunkar, SP Gaurav Tiwari and other officials appealed to passengers to cast votes. The passengers were greeted with flowers. Flower bouquets were given to train driver and his assistant. Chauhan also flagged off Nirvachan Express from Ratlam railway station to Dwarka- Okha (Gujarat).

Scouts and women and child development department representatives were also present on platform to display banners and posters giving message on importance of vote to passengers of Nirvachan Express. Though the scheduled arrival of Guwahati-Okha-Dwarka Express at Ratlam railway station is 10.45 am, it reached at 12.20 pm. After 20 minutes of stoppage, it left for Dwarka-Okha (Gujarat).

Election Commission in association with railways has launched voter awareness campaign and four trains of Indian Railways have been named as Nirvachan Express to spread the message of voting. These trains are Guwahati-Dwarka- Okha Express, Himsagar Express, Ahmedabad-Howrah Express and Kerala Express.

These trains will carry message of SVEEP till elections end. Election Commission hopes to generate voting awareness through SVEEP messages. Dwarka Express, which arrived here as Nirvachan Express, is a Mail Express (MEX) that runs between Guwahati and Okha covering journey of 3,226 kilometres and has 43 stoppages. Dwarka Express is a weekly train and it takes 65 hours and 10 minutes time to complete its journey.