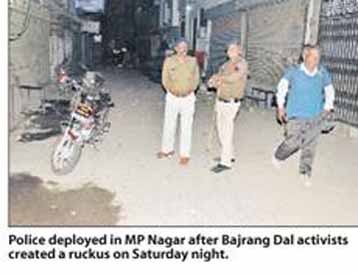 BHOPAL:Bajrang Dal activists and leaders created ruckus and damaged the furniture of a hotel in MP Nagar area in an inebriated state on Saturday night. The accused even issued life threats to the hotel staff and manager. Police force led by senior officers rushed to the spot to control the activists who had turned outrageous. According to information about a dozen Bajrang Dal activists enjoyed drinks and entered Hotel Sangat Plaza in Zone- 1 of MP Nagar.

Under the effect of liquor they allegedly created ruckus and even manhandled the staff when they were stopped. They turned violent and resorted to stone pelting and damaged the glass and furniture of the hotel. They used abusive language and threatened of dire consequences.

They also issued life threats to the hotel staff and manager. However, they fled before arrival of police. TI of MP Nagar police station RR Bansal said these activists had terrorized the people in an inebriated state. A complaint was lodged by the manager Subhash Pathak and a case was registered against the accused. Police force was deployed in the area to avoid any further trouble. Police deployed in MP Nagar after Bajrang Dal activists created a ruckus on Saturday night.