A video of the incident, which took place on Tuesday, went viral on social media.

Rewa (Madhya Pradesh): Four women were forced to carry the body of their woman relative on a charpoy for nearly five km in Madhya Pradesh's Rewa district as no hearse was available.

In fact, no government hospital or health centre in the district has a hearse though they have ambulances, said a senior medical officer.

A video of the incident, which took place on Tuesday, went viral on social media.

The daughter of the dead woman was among the four who carried the body on their shoulders. The other three were her relatives.

District Chief Medical and Health Officer (CMHO) Dr B L Mishra said on Wednesday that the woman, aged about 60 years, was unwell.

She died at the Raipur Karchuliyan community health centre during treatment on Tuesday, he said.

As no hearse was available at the center and efforts to arrange one were taking time, the women on their own put the body on a charpoy (weaved bed) and took it to Mehsua village, five km away, the CMHO said.

A hearse is not available in the entire district, Dr Mishra said, appealing people to donate one "instead of making videos and circulating them". 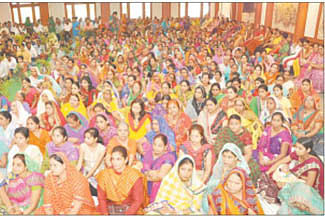