It has not only damaged the standing crops severely but has also affected the quality of the produce.

Torrential rains have spoiled the labour of the farmers across Madhya Pradesh. Kharif season crops such as soy bean, groundnut, pulses and cotton, among others, have been hit by excess rains both during the growth stage and in the harvest period. It has not only damaged the standing crops severely but has also affected the quality of the produce

Farmers across Mandsaur on verge of losing their Kharif crop

Situation in Mandsaur and its adjoining districts in the state turning from bad to worse as majority of farmers either lost their crop or on verge of losing their standing Kharif crop.

Soy bean, maize, urad, moong, tur growers in the area demanding immediate extensive survey of crop so that they could get a benefit of crop insurance and that enable them to get money for rabi crop.

According to information, about 900 villages in the district might witness 25 to 40 per cent dip in harvest this season. Farmers claimed that despite bearing substantial loss due to torrential rain in last few days and the pest attack, administration and agriculture department claiming only five per cent loss.

Meanwhile, agriculture department and administration department carrying out survey in different villages, but delay in survey will take toll on farmers.

Farmers who are solely depends on soybean crop claimed that they might not get enough price to incurred money they invested in the crop. They added that they are getting Rs 3200 to 3500 for one quintal of soybean, but in reality government must fix Rs 5000 minimum support price for soybean so that farmers could earn something.

They informed that total cover of kharif crop in the district is around 3.3 lakh hectare and at majority of parts crop was damaged due to heavy rain and pest attack.

After rain pest attack add to woes of farmers in Alot

Hundreds of farmers in the region either lost their crop or on verge of losing their standing crop due to pest attack and incandescent rain since past few days.

Ex-sarpanch of Joyan, Ratan Singh Anjana informed that till past few days crop including soy bean, urad and other Kharif crop was in good condition despite scanty rainfall. But incessant rain and pest attack have severely damaged the crops.

Team visited various villages under Taal and Alot development block and had words will the farmers as well. They informed farmers about what they have to do in case of pest attack on the crop.

Farmers from Rajpur and its adjoining villages who either lost their crop and on verge of losing their standing crop left in a tight spot due to inaction of agriculture and horticulture department. They alleged that the officials of both the departments have failed to provide them any inputs amid the havoc caused by the incessant rains in the region.

Farmers informed that due to recent heavy rainfall, majority of maize crop was damaged due to pest attack. As the crop already attend its maximum height, famers can’t use pesticides on the crop. Farmers claimed that they are continuously approaching department officials to get suitable advice, but all went on a deaf ear. 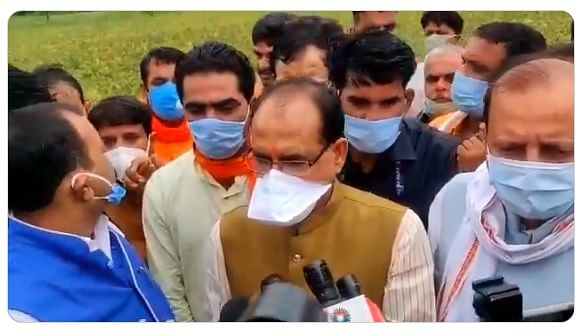