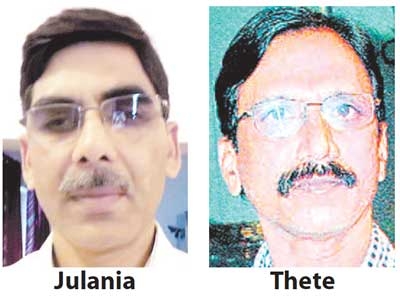 Thete, in a letter to chief minister Shivraj Singh Chouhan, has claimed that his most ‘favourite officer’ Julania had made him an ‘untouchable’ and a ‘sweeper’. Thete wrote that Julania had usurped all his powers and had made him a sweeper by assigning him the work of building toilets and keeping them clean.

Thete alleged that Julania’s had a casteist mindset and was humiliating him as he belonged was an SC. Thete has attached a CD of his audio conversation with Julania with his letter to substantiate his charge. Thete demanded Julania should be arrested under SC, STs (Prevention of Atrocities) Act and should be sent to jail.

Citing Chouhan’s address at a convention of AJAKS, Thete wrote that on one hand, you advocate protection of Dalits and tribals but on the other hand, you give protection to officers like Julania. According to Thete, Julania had terminated the services of many officers belonging to SC, ST categories during his six-year-long tenure as principal secretary of water resources department for six years.

Thete claimed that now Julania wanted to do the same in Panchayats and rural development department. He accused Julania of continuously harassing him. Thete wrote that he is ready to die but not be a slave. He warned that if action against Julania was not taken then he would launch an agitation. “I am ready to pay any price for it” he said.