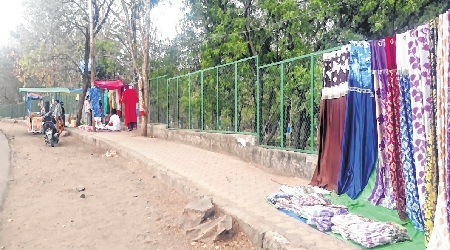 ‘Neki ki deewar’ inaugurated by former chief minister Shivraj Singh Chouhan at South TT Nagar in 2016 has disappeared, courtesy poor public response. In state, as many as 172 walls were dedicated for the needy, six in the state capital. The noble initiative, launched under the banner of Anand department, is dying a slow death in the city as it failed to garner required public support. Two of the six dedicated walls have ‘disappeared’ in the city. The four existing walls too have failed to revoke favorable response from people, thus failing to serve the desired purpose.

The first wall was inaugurated at south TT Nagar area in the presence of former CM. A bin was then placed near a primary school and six other areas of the city to encourage people to donate old clothes and miscellaneous useful things for those in need.

The very first bin installed under the initiative at South TT Nagar has gone missing. Owing to poor response, the neglected “neki ki deewar” was then shifted to Shahpura from South TT Nagar. For a while, the wall attracted some kind-hearted people, but the response gradually faded out and today the wall is nowhere to be seen. The wall at Kolar area suffered a similar fate.

Mahesh Agrawal, who worked for the cause in Kolar area, said that the thieves did not even spare the ‘Neki ke Deewar’. The miscreants would steal the donated goods kept in the bin, and finally they made away with the bin itself and also the banner, he added.

Sarash Shrivastava, an MBA graduate who is devoted for the cause said that he has started promoting online his ‘Neki ki Deewar’ situated at Jawahar Square. Lack of promotion has hit hard the noble initiative and many people are not even aware of it, he added. fulfilling his father’s last wish, Sarash, after his father demise had donated his organs and since then has devoted himself in philanthropic work. Stating that he wants to work for needy till his last breath, Sarash said that he has developed a shed and ensured other arrangements near ‘neki ki deewar’ at Jawahar Square.

Chief executive officer (CEO) of Anand Department Akhilesh Argal said that they fully support all noble initiatives which spread happiness among people. He, however, maintained that such initiatives totally depend on people’s response and their benevolence as they (department) is not involved directly in it.  The department is now seeking the list of all the ‘Neki Ki Deewar’s running across the state, said Argal, adding that the department would shift the wall of charity from areas where it is not faring well and relocate it at new place.