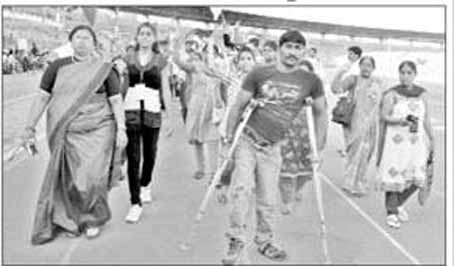 BHOPAL:Governor Ramnaresh adav has said that physical disability is not a curse in life. No one is perfect and if the special kids get proper exposure, they would also serve the country. There is a need to provide equal treatment to the special kids as normal kids in homes as well as in the society.” He was addressing the closing ceremony of 5- day National Games- 2012 of Special Olympic Bharat ( SOB) at Tatya Tope Stadium, TT Nagar, on Saturday.

” The Madhya Pradesh government and Central government are doing their level best for giving proper training and exposure to the special kids. National Games of Special Olympics Bharat gives fresh lease of energy to the special kids and they would also do better at national and international levels in similar fashion”, he said, adding, ” There is need for proper motivation and special kids should never be demoralized.” Earlier, Madhya Pradesh has been given best dress- up awards while Best discipline awards was given to Gujarat and Best Performance award was given to Maharashtra team. March- past was taken out. Disabled children of Ashaniktan School, Bhopal, presented colourful cultural programme before Governor Ramnaresh adav and district in- charge minister Jayant Mallaiya.

National games 2012 close; MP awarded for best dress- up Govt committed to welfare of special kids D istrict – in- charge minister Jayant Mallaiya said, ” The state government is doing its best for promotion of special kids. First time in 1961, such kind of Olympics was held in US and then after 10 years, it was held in India and after 30 years, it was held in Madhya Pradesh. This is second time when special Olympic was held in Madhya Pradesh.” Gujarat’s special kids participate in the march past at the closing ceremony of National Games of Special Olympics Bharat ( SOB) at Tatya Tope Stadium, TT Nagar on Saturday.