BHOPAL: A 34- year- old woman, posted as DSP rank officer in Central Bureau of Narcotics at Neemuch allegedly thrashed a constable on duty near police Chowki at Jyoti Talkies, posing as SP ( Narcotics) on Monday afternoon. 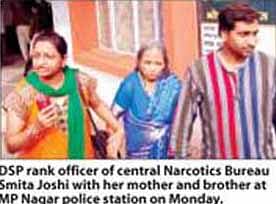 Following the incident, the accused woman, her 7- year- old daughter and woman’s brother were brought to MP Nagar police station. However no case has been registered against her and TI, MP Nagar, Brijesh Bhargava let her go after taking written complaints from accused woman and victim constable.

Singh further said, the incident took place at around 2: 30pm near Jyoti Talkies as the woman along with his brother Danish Tamrakar who resides at Sagar Enclave in Ayodhya by- pass and 7- year- old daughter was taking her mother, who is diabetic patient, for cataract operation to a hospital from Ayodhya by- pass in her Tavera jeep.

Near Jyoti Talkies, a youth riding Pulsar bike hit her vehicle from the backside following which she stopped her jeep in the middle of the road, started exchanging heated arguments with the youth, which led to traffic jam like situation at the spot. Later constable Santraj ( 28)

who was o duty and was present along with other police personnel in PCR Van came there and told the woman to park her jeep at roadside as other road users were facing problem, subsequent to which Smita started beating up the constable. In the meantime, the youth fled from the spot on his bike.

In the aftermath of the incident, at around 3pm, the woman and her brother were brought to MP Nagar police station, where the woman started to create ruckus and used abusive language in presence of TI, Brijesh Bhargava, posing as SP ( Narcotics).

However after the intervention of senior police officials, the woman was allowed to leave the police station without registering any case on assurance that after operation of her mother she will herself come to the police station for further action in the case.