They were collecting eatables from villagers.
Staff Reporter 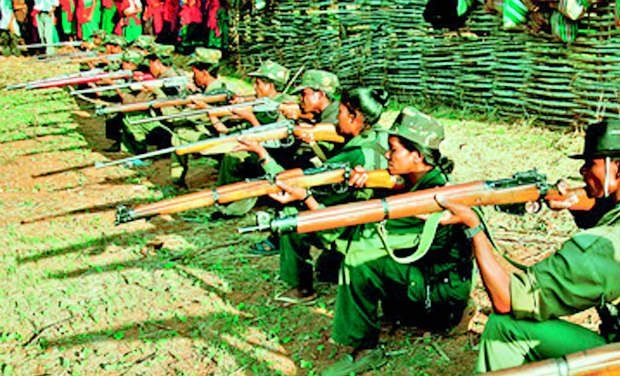 BHOPAL: Balaghat police gunned down two woman Naxals under the Kiranpur police station on Friday night.
ADG, Anti Naxal operations GP Singh, informed in the press conference that the Balaghat police had got the tipoff that some Naxals were gathering in Borevan and were collecting eatables from the villagers.

Immediately, the Hawk Force and district police reached the village and surrounded the Naxals. They even asked the Naxals to surrender but the extremists opened fire on the police party. The police also opened fire and in the cross firing one Naxal Shobha,25, was killed. She was resident of Gadchiroli of Chhattisgarh. When the police party checked the area, they found the dead body of the woman along with the 12 bore rifle and live cartages.

In the morning at 5.30 am, the police launched a search operation and they faced volley of firing from the Naxals.

One more woman Savitri was killed in the encounter in the morning, she was resident of Gangnoor of Bijapur of Chhattisgarh. The police have seized Insas rifle and live cartiges. The Naxal was injured in the cross firing happened in the night, in morning she remain waiting for the police party so that she can again open fire on them.

The ADG said that both were wanted in many cases by the three states. The state MP has awarded Rs 3 lakh on Shobha she was the member of the Malajkhand area committee and she was having the reward of Rs 5 lakh from the state Chhattisgarh and Rs 6 lakh from state Maharashtra.