He made the statement at a function held in Babai block in the district to celebrate the 497th birth anniversary of queen Durgawati.

He made the statement at a function held in Babai block in the district to celebrate the 497th birth anniversary of queen Durgawati.

A large number of people from different parts of the district were present on the occasion.

Both the Central Government and the state government are committed to protect the tribal people’s rights, Kulaste said.

Each person, belonging to the tribal community, will get Rs 20 lakh instead of Rs 10 lakh, if they are displaced for any development project, Kulaste said.

Besides that, there will be efforts to provide them jobs in private companies, he added.

A building to organise the cultural events of the tribal society will be constructed in Hoshangabad at a cost of Rs 25 lakh, the minister said.

The nation should take inspiration from the legends of Durgawati and work for the country, Kulaste further said.

As erosion in the Tawa river has affected the farmers, pitching will be made in the stream to check erosion, Kulaste said, adding that drinking water will be supplied through pipelines to the areas dominated by tribes.

According to Kulaste, the eligible people will be provided with houses under the Prime Minister’s Housing Scheme.

Member of Parliament Rao Udai Pratap Singh said that the tribal people had got the benefits of the welfare schemes launched by the Central Government and the state government and began to move ahead.

The government has always taken care of welfare of the tribal people – whether it is related to lands or to displacement, he said.

The Member of Parliament further said that the government was committed to provide roads, electricity, houses, education and other facilities to the tribes.

Legislator Vijay Pal Singh said efforts would be made to promote the welfare of the tribal people and to provide them better package in case of displacement. 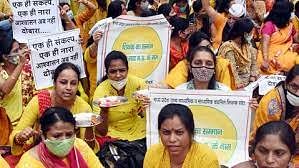