Seoni (Madhya Pradesh): The decomposed carcass of a tiger was found in Madhya Pradesh's Pench Tiger Reserve and forest officials suspect it to be a case of territorial fight between two felines.

Senior officials and experts rushed to the spot and examined the carcass, he said, adding that all body parts were found intact. A dog squad was also sent to the spot, but no evidence of any illegal activity was found, Parihar said.

The animal's viscera was collected and sent for a forensic examination, he added. The tiger reserve's deputy director, M B Sirsiya, told PTI that the feline, aged between 12 and 14 years, apparently died eight to 10 days back as the carcass was highly decomposed.

"An examination of the spot indicated that the tiger might have died following a conflict with another tiger, but the exact cause of the death will be ascertained only after the forensic examination," he said.

After the autopsy, the carcass was disposed of as per guidelines of the National Tiger Conservation Authority (NTCA), Parihar said. 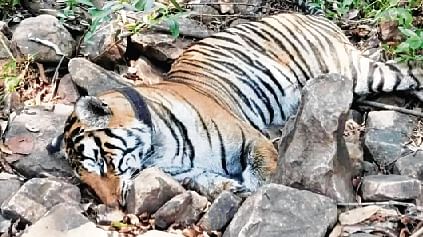