The chief minister flagged off Satna-Itarsi, Satna-Manikpur and Katni-Bina MEMU trains through video-conferencing from his residence.
PTI 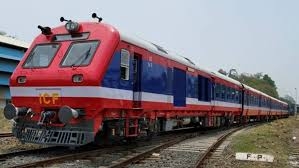 The chief minister flagged off Satna-Itarsi, Satna-Manikpur and Katni-Bina MEMU trains through video-conferencing from his residence, while the main function was held at Satna, an official said.

The trains are equipped with all modern facilities such as GPS, digital displays, CCTVs and bio-toilets, and will be a boon for daily commuters, the official said, quoting Chouhan.

Speaking on the occasion, Chouhan said rail, telecom and road connectivity is continuously increasing in the state.

Madhya Pradesh has more than 700 stations and over 4,800 km long rail network, he said, adding that the Lalitpur-Singrauli line will also play a major role in the development of the region.

The three MEMU trains will operate under the West Central Railway's Jabalpur division.

The MEMU trains have eight coaches each, which can accommodate 650 passengers, Singh said, adding that the trains will run at 100 km per hour and will stop in all stations enroute.