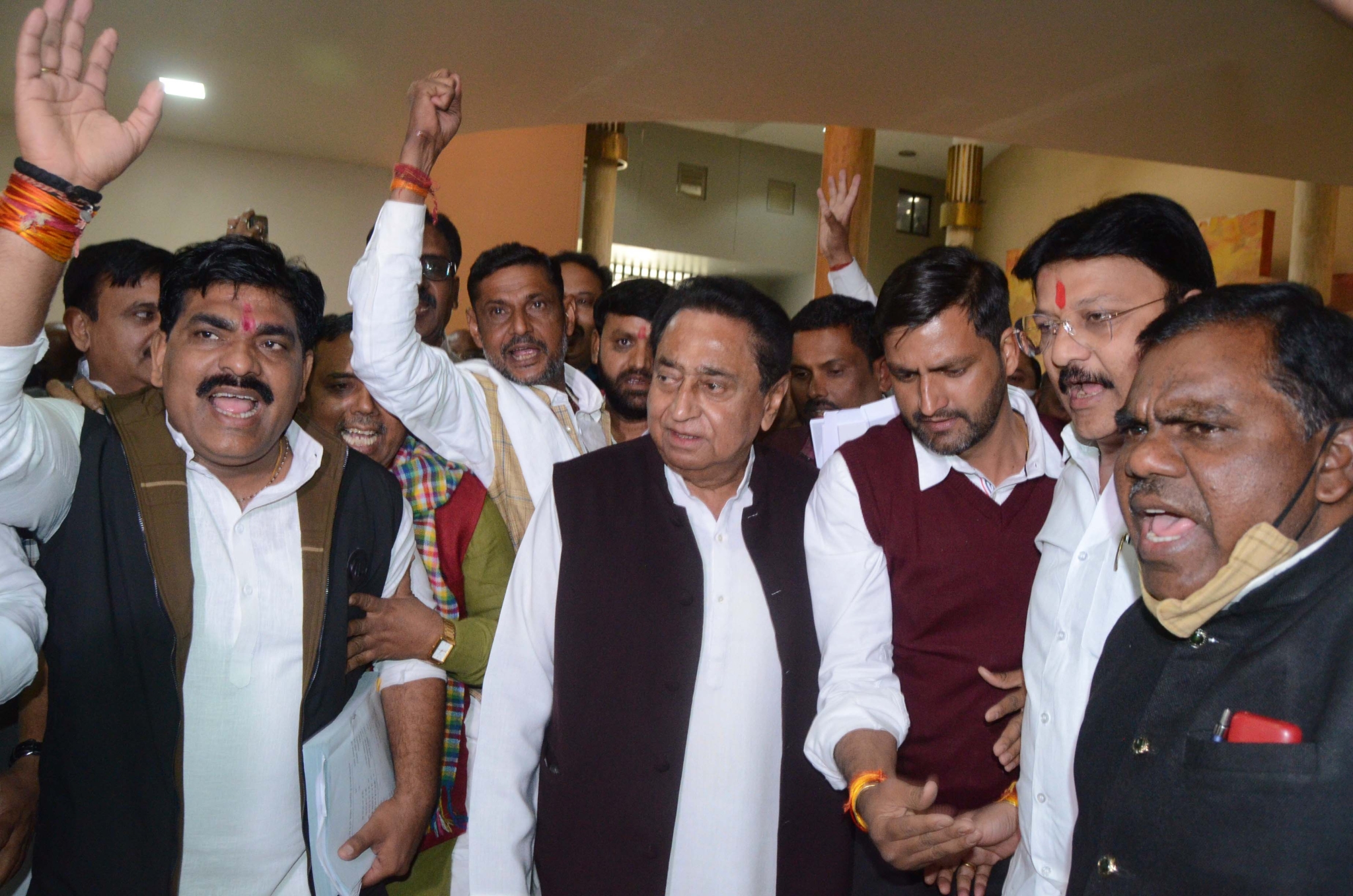 Leader of Opposition Kamal Nath and other Congress MLAs stage a walk out from House in Vidhan Sabha when Nath was not allowed to speak in House on Thursday. | FP

Bhopal: Stalemate between the Treasury benches and the Opposition in the state legislative Assembly led to a unanimous resolution on Thursday that 'panchayat polls will not be held without OBC reservation'.

Chief Minister Shivraj Singh Chouhan who moved the resolution also announced that state government has already filed a revision petition in the Supreme Court (against its recent order) and was pursuing the registrar general for an early hearing on the same.

The resolution was, however, preceded by uproarious scenes in the House as the Opposition Congress members led by leader of Opposition Kamal Nath demanded CM's reply as to what he did against the announcement he made two days back that the state government would move the Supreme Court and make all out efforts to ensure that panchayat polls were held with OBC reservation.

The state election commission (SEC) has deferred the panchayat polls against posts reserved for the other backward classes (OBCs) in view of the recent Supreme Court order on certain Congress leaders' petition. Of late, the commission also announced that there would be no counting tabulation and declaration of results on posts against which polls are held.

The House proceedings had to be adjourned thrice during the question hour- first for 15 minutes at 11.10 am, for 10 minutes at 11.36 am and then 10 minutes again at 11.50 am as Congress MLAs entered well of the House and continued to raise slogans against the government and members from both sides indulged in a spar.

Speaking on the resolution, Chouhan said, "The state government is committed to ensuring justice to every section of society whether it's the poor among the upper cases or the SC/ST or the OBC."

The CM said it's the Congress which moved the high court and later the Supreme Court against the reservation that the present situation was created and because of which resentment was brewing in public across the state.

Having filed the revision petition, the CM added, the registrar general of the court was being persuaded for an early hearing on the petition.

Leader Opposition Kamal Nath said, "I talked of the resolution in the House two days back but the CM is coming with the same 48 hours after his statement that the government would ensure panchayat polls with OBC reservation."

The Congress MLAs staged a walkout and remained absent in the House throughout the proceedings after Nath was not allowed to speak in the House after the resolution was passed.

Earlier, Home and Parliamentary affairs minister Narottam Mishra said nothing could be mentioned on the subject (OBC reservation) once the resolution was passed unanimously.