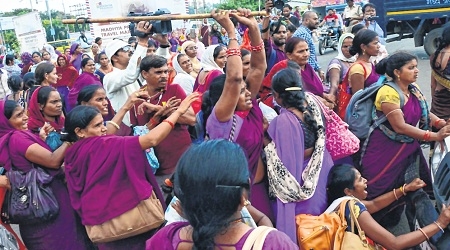 BHOPAL: A high voltage drama occurred at the Polytechnic Square where two ASHA workers climbed on two telecom towers and a Sadhu was forcefully removed from the dharna area here on Wednesday. Police had a tough time to control the situation as both the incident occurred in the same area as the spot is a busy area. An ASHA worker fell to ground from a telecom tower in Polytechnic Square on Wednesday while police were trying to bring down the woman, barely 200 metres from Chief Minister Shivraj Singh Chouhan’s residence, when she fell. Five policewomen were also injured in the incident.

The ASHA and USHA workers from across the state were staging demonstration at the square to press their demand for fixed salary of Rs 15,000 since Tuesday. They remained at the square whole night along with the small children.
They were also demanding to meet the CM to raise their demand, but even after 24 hours, no government official or politician reached there to listen their demands.

On getting a message came from principal secretary Gouri Singh that he wanted to meet the representatives of the workers, a delegation reached Vallabh Bahwan, but she did not meet the delegation. On this the workers became furious and two women climbed on the two towers. Police tried to bring them down them safely and this process five police personnel and a worker got injured as they fell off the tower. The angry workers had clash with the police and to control the situation police resorted to cane charge the workers. The police also arrested 86 workers who were later released on bail. Sadhu Sants are staging dharna from Monday at Shitaldas Ki Bagiya demanding that the district collector should not be the chairman of the managing body.  One Wednesday morning, police removed their tent which made the Sadhus furious.  They staged road block raising slogans against the chief minister and state government.

Police tried to pacify the Sadhus but they did not listen to the police appeal. Later police arrested the Sadhus. The ASP Dinesh Koshal informed that the police have arrested 105 Sadhu and Sants and latter released on bail. Due to the demonstrations, traffic from Raja Bhoj Setu to Roshanpura Square were hit badly. School buses and ambulances had tough time to cross the area. After the ruckus and strict action by the police, the situation came under control.

Oza meets agitators, criticises CM
Congress women leader Sobha Oza reached there and met the ASHA-USHA workers. She alleged that the act of police and the attitude of the government and chief minister are inhuman. The CM should have given time to meet the workers whom he says that they are his sister. Then why Mama did not give time to meet his nieces and sisters”.