FDI will go, if NDA comes to power: Joshi 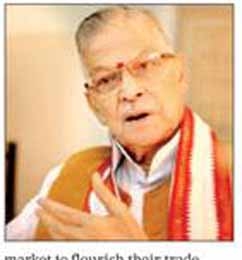 Bhopal:The decision to allow foreign direct investment ( FDI) in retail taken by the UPA government will be withdrawn, if national democratic alliance ( NDA) comes to power in the Lok Sabha elections. This was announced by former Union minister and senior BJP leader Dr Murli Manohar Joshi on Saturday while interacting with journalists during his city visit. Joshi said entry of FDI will not at all improve the economy of India but it will boost China’s economy as the four companies which will be benefited by the entry of FDI in India are those which are supplied material by 6000 different companies of China. Defeat of NDA on the issue of FDI in the Parliament is the victory of central bureau of investigation ( CBI), added Joshi.

He claimed that Wallmart in its balance sheet had mentioned that it had spent 53 million dollar for the entry of FDI in retail in India. Joshi alleged immense corruption had taken place in allowing FDI in retail. Joshi, criticising the entry of foreign Insurance companies in India, said foreign companies were running in a loss and they see India as a big market to flourish their trade. Joshi ducked the questions about former chief minister Digvijay Singh, saying that he is a great personality and “ a person like me is not in a position to say anything about him”.