When the smart city concept came to Bhopal years ago, cycle tracks were constructed to promote eco-friendly atmosphere by inspiring people to use cycles.

Bhopal(Madhya Pradesh): Constructed with much fanfare to promote eco-friendly transport i.e. cycling and health of people on mind, the bicycle tracks in the city is being used for parking purpose at many points negating the objective behind the concept and its implementation.

When the smart city concept came to Bhopal years ago, cycle tracks were constructed to promote eco-friendly atmosphere by inspiring people to use cycles.

As time flew away, cycle tracks slipped into mess in want of maintenance and saw encroachment by vehicles and shops as well. Hence, the aim with which the cycle tracks were constructed went into oblivion.

When contacted, sub-engineer of Bhopal Municipal Corporation (BMC), PK Jain told “Free Press” that two to three months back, cycle tracks have been handed over to Bhopal City Link Limited (BCLL). He admitted that cycle tracks are in a bad shape and parking vehicles on tracks remains an issue. 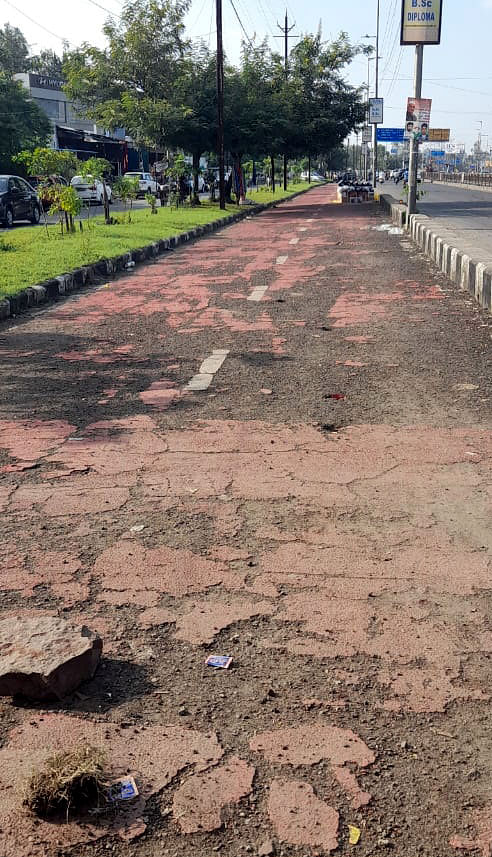 No one cares to maintain the cycle track which is in very bad shape . | FP

“Free Press” also tried to know the view of common people in this regard. Guddu Malviya, a roadside shopkeeper at Surendra Palace area, said he had hardly seen anyone riding cycle on cycle track. He opined that if cycle tracks of both side of Misrod Road area are turned into roads then traffic pressure on Misrod Road area will get reduced drastically and number of accidents will also come down. Misrod Road often witnesses long traffic jams.

A youth, Golu Bhargava from Ashoka Garden said cycle tracks are so bad at places that even it will be difficult for a motor cyclist to ride a bike. Sushil, a roadside vendor said that he used to open his shop from morning hours but he had not seen anyone riding a cycle on the cycle track which is hardly maintained by the concerned agency.

Vinay Ahirwar, a fruit seller said that he opens his shop from 10 am onwards and runs it till 5 pm. During this period, he had not seen anyone riding a cycle on the cycle track. As no one cares to maintain the cycle tracks, they are in a mess. Some people even used to park their vehicles on cycle tracks which are only meant for cycling.