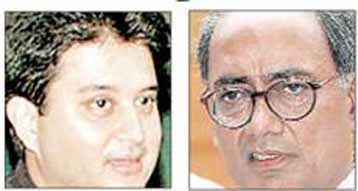 BHOPAL:In the wake of Congress national President Sonia Gandhi instructions to the state Congress leaders in Congress coordination committee to put up an effective opposition to the BJP government, party leaders like former chief minister Digvijay Singh, Union minister of state for energy ( Independent charge) Jyotiraditya Scindia and state Congress President Kantilal Bhuria, at a programme in Guna, will call upon party leaders and workers to unite themselves.

At the inaugural function of new office building of district Congress in Guna on Sunday, Diggy and Scindia, the stalwarts in Congress, will be on one stage to send out a message to the party leaders and workers that they are one and will contest the Assembly elections unitedly. The duo came closer in the elections of Madhya Pradesh Cricket Association when Scindia was helped by Digvijay Singh by garnering votes for him. Similarly, Scindia in the recent past had said that he would contest Assembly elections under Bhuria’s leadership.

According to sources, Sonia Gandhi after the meeting of coordination committee had assigned Digvijay Singh the task of making Congress strong in the state besides urging Scindia and Pachauri to support Singh in this work. coming on one stage has also boosted the morale of its party workers. Guna district Congress committee president ogendra Lumba said the presence of these leaders in the programme will have good impact on the party workers of the whole division. It will also check rumours of infighting in Congress, spread by BJP. The Guna programme shows that Congress had started implementing its election strategy as in the recent past it had successfully organised a rally in Katni in support of farmers. Congress is also planning to organise ‘ Karyakarta Sammelan’ in every district to be attended by its main leaders, on the lines of BJP. Cong begins implementing Sonia’s get- united directive

Digvijay Singh has alleged that BJP was adopting double standards on the issue of foreign direct investment. He claimed that BJP opposes FDI in the Parliament while in the BJP- ruled states, including Madhya Pradesh, it is promoting ‘ Best Price’ stores opened in joint collaboration of Wallmart and Bharti. Singh, interacting with journalists in Bhopal, said, two Best Price stores have been opened in Bhopal.