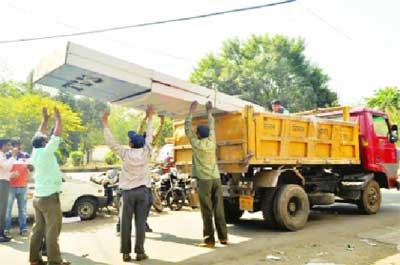 BMC has intensified the drive after High Court order.

The drive will continue till February 10. It was the fifth day of the drive which BMC administration has launched to removed illegal hoarding.

The areas which were targeted on Sunday include Pull-Bogda, Ashoka Garden Chowraha, Apsara Talkies, Indrapuri, Sonagiri, Chinar Park (Link Road No-1). However, the BMC team had to face ire from hoarding directors and others but there was heavy police force to manage the show and the BMC removed the illegal hoardings.

BMC administration had already sent notices after High Court order to owners and directors of advertising hoardings but they did not turn up to remove themselves. Three truckload frames, structures and hoardings were seized and sent to BMC store.

All the operation was executed amidst heavy police force to handle the protest.