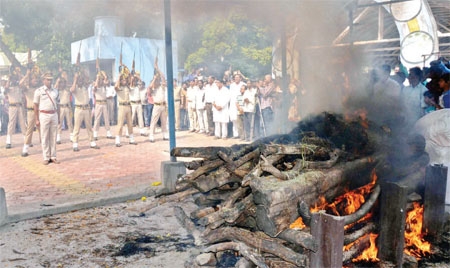 BHOPAL: The mortal remains of head constable Ramashankar Yadav were consigned to flames amid full state honour at Chhola crematorium in the city on Tuesday. Chief minister Shivraj Singh Chouhan met the bereaved family to console them and assured all possible help.

Yadav, a native of Rajpur Ekauna village in Haldi area of Balia district, UP, was posted as head constable at Bhopal Central Jail.

His untimely demise was a great shock to the family, as the marriage of his daughter Sonia was scheduled to be held on December 9. He was going to take a leave for preparations of his daughter’s marriage. His two sons Shambhunath Yadav and Prabhunath Yadav are in Indian Army.

Taking a dig at the Congressmen who raised finger at encounter of SIMI operatives, CM Chouhan said, “Shame on such politicians who are eying on votes banks.”

CM appeared anguished with the raging debate over the encounter. Some of the politicians are raising questions on the encounter but they can’t see supreme sacrifice of martyr Yadav, Chouhan said while taking part in Yadav’s last rites.

Minister of state for cooperatives, Vishwas Sarang, Jail minister Kusum Mahdele, top police and administrative officers were also present in the funeral.  A huge crowd also gathered to bid adieu to the departed soul. People lined up on both the sides of the road from where the funeral procession passed through.