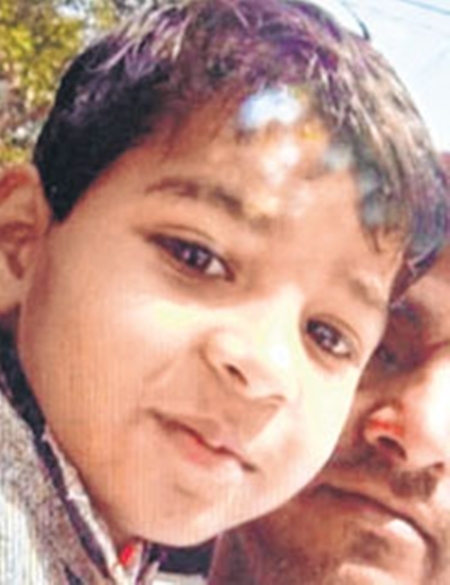 Bhopal: A KG-II student of Sai International School of Dolariya in Hoshangabad district, who was found unconscious in school director’s locked car and rushed to a hospital on Monday, died during course of treatment at Rainbow Hospital in Bhopal on Sunday.

According to reports, Naitik Gaur (6) was a student of Sai school. His parents lived in Bagwara, around 10kms from Dolariya. After post-mortem at Hamidia Hospital, the parents took the body to Bagwara. It was said that school directors and Gaurs are relatives.

Boy’s father Surendra Gaur said, “My son used to go to school by van. On Monday, the van did not arrive. Hence, school director Utkarsh Gaur drove down to our house in his car and took my son to school. After half-an-hour, I received a call informing that Naitik was not feeling well. I rushed to the school and was told that he has been admitted to Narmada Hospital in Hoshangabad. We reached the hospital and found that he had been put on ventilator. Later, he was referred to Rainbow Hospital, Bhopal.”

Sub inspector Chakradhar Pandey of Bhopal’s TT Nagar police station said, “ Naitik was taken to school by director in his car. As he was quite a naughty and mischievous kid, the director asked him to stay back in the car. He was to be taken directly to his class at the start of examination. The car was locked and even window glasses were locked. Later, school staff found him unconscious. He was rushed to Narmada Hospital in Hoshangabad from where he was referred to Rainbow Hospital in Bhopal on Tuesday. He died on Sunday. Police have filed a case and sent the case diary to Dolariya police station in Hoshangabad.”

Sub-inspector Mitu Pal of Dolariya police station said, “Naitik was suffering from respiratory problem. As per his father’s statement, the boy’s health condition deteriorated soon after reaching school. He was informed about it by the school management and reached Narmada Hospital. We are waiting for the case diary.”

Dr Rajan Khetrapal of Rainbow Hospital said, “Naitik arrived in hospital with external respiratory machine. He passed away on Sunday.” School director Nitin Gaur said, “Naitik’s father is our brother-in-law. Four of our students come from Bagwara. On Monday, Utkarsh drove the four kids to school in his car. Naitik was unwell and suffering from respiratory problem and congestion.

We immediately informed his father and rushed him to Narmada Hospital in Hoshangabad which is 35 km from Dolariya. As Naitik’s parents are relatives, we admitted him to Narmada and later took him to Rainbow Hospital. Doctors retrieved nearly 200ml cough from respiratory system due to severe congestion.”