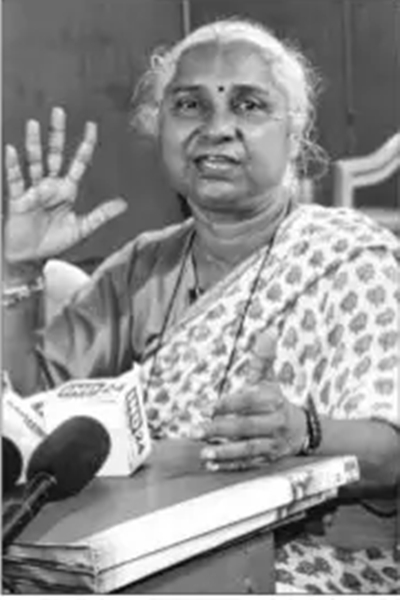 Bhopal: Prime Minister Narendra Modi is all set to ‘celebrate death’ of one lakh oustees on September 17, the day when he is proposed to dedicate the Sardar Sarovar Project (SSP) to nation in Gujarat, said Narmada Bachao Andolan leader Medha Patkar here on Wednesday.

Patkar said the move to dedicate the SSP to nation is aimed at reaping political gains in upcoming polls in Gujarat. “The dam is being dedicated in a hurry without rehabilitating 40,000 families living in the catchment areas in Madhya Pradesh,” Patkar told reporters.
In a joint press conference attended by Congress leader Ravi Saxena, AAP state coordinator Alok Agarwal and left party leader Saroj Badal and NBA leader Medha Patkar spoke on the alleged failure of the state government to properly rehabilitate oustees.

All the leaders alleged that the state government claims of rehabilitation was far from ground reality as the oustees were having hard time and were leading a wretched life at the sites they have been rehabilitated. The plots allocated are full of trench and pits, there is no water supply at the rehabilitation sites and roads have been washed away, said Patkar adding that temporary tin shades raised up at the sites for the displaced families were lacking basic facilities.

Patkar alleged that around 40,000 families were still residing in the submergence area. She claimed that the since Gujarat has witnessed good rains it does not need any water from Madhya Pradesh or from SSP in the current year. But the prime minister is going to dedicatee SSP to the nation eying the coming elections in Gujarat .

AAP leader Alok Agarwal alleged that according to Supreme Court’s rehabilitation guidelines there were 17 essential points which were to be strictly adhered to, however the government have put them at bay. Congress leader Ravi Saxena claimed that the party is with the displaced people and whichever party comes to support the movement they are welcomed.

Left party leader Saroj Badal raised the issue of providing Medha Patkar personal security, who allegedly if on target for raising voice against the many organisations and establishments.