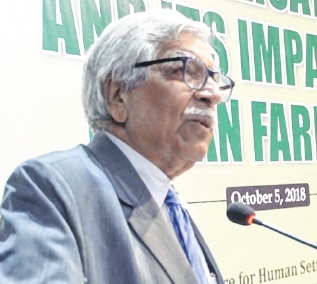 Renowned economist and former member Indian Planning Commission who introduced agro-climatic planning in India, Yoginder Alagh stresses on need to fulfill promises made to farmers. He says that not listening to farmers’ problems is sign of dangerous times ahead. He was in state capital to take part in Buch memorial lecture series.

Talking to Free Press, Alagh said that the hike in minimum support price (MSP) by the government should be looked into in all prospective. The MSP was raised on the ‘owned cost’ and not the ‘rental cost’, which small farmer actually pays. Also when business tycoons make a rental, they use the scarce commodity tactic and the government does not say anything.

Farmers’ income is going down by five percent annually while those in jobs get annual increment. Now the government has stopped speaking on farmer issues, if they at least do it half of the dissent, distress, tension and stress of the agrarians could be reduced, he added.
Replying to a question on exploitation by middlemen he said most of the farmers still go to middlemen who cannot be eliminated because they have access to the market. Cooperatives too failed because politicians infiltrated there and spoilt the whole concept.  Expressing his views on NITI Aayog, doctorate in Economics from the University of Pennsylvania, USA said that the Aayog is a weaker version of planning commission. They do not plan for future.

The aim is to create plans and execute them but the power of sectoral allocation has been taken away from the NITI Aayog which defies the ultimate goal. Commenting on present day politics, Alagh said that the business of making exaggerated promises does not go very far. Earlier leadership who went through freedom struggle it would recognise the problem and look out for solutions by calling in experts and not cover the issue, now the governments do not want to talk.