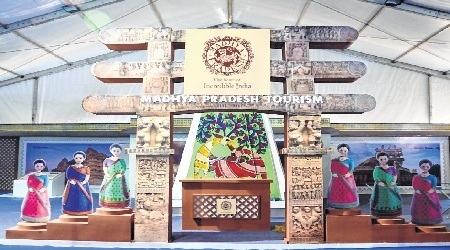 Fifth edition of MP Travel Mart slated to be held in the state capital from October 5-7 will focus on promoting adventure tourism in MP. Over 190 buyers, 80 sellers and exhibitors besides representatives of various organisations including Tour and Travel Association, Hotel-Hospitality and ATOAI would be attending the event.

“MP has a lot to offer tourists including its rich wildlife, heritage, culture, food, adventure along with potential to explore these areas. This travel mart would act as platform for interaction between the buyers and the sellers,” said Hariranjan Rao, principal secretary tourism.

Bandhavgarh and Kanha national parks remain almost full during season time and there is rush for more entry tickets. Considering this now buffer zones have been opened during season when core areas are closed. This has added to number of tourists, he added.  Considering international and national trends, MP has also developed several adventure treks and trails.  Adventure sports including river rafting, rock climbing, sailing too are being promoted.

Tourist’s spots like Hinglaj temple, Hanuwantia island, Sailani Island located in backwaters of Indira Sagar Dam in Khandwa district near Omkareshawar have huge local, national and international potential, said the official.  In an effort to project Minto Hall at national level a cultural programme and dinner for delegates was organised at International Convention Center in Minto Hall on Friday evening.

Primary objective of this mart is to market and promote MP as a year long tourist destination. Exclusive focus remains on domestic and inbound tourism into Madhya Pradesh to reassure the position of the state as a preferred tourist destination in the world.

Sessions at expo
Minister of state for tourism Surendra Patwa will inaugurate the MP tourism mart on Saturday 9.30 am. Chairman, tourism corporation Tapan Bhoumik and principal secretary tourism Hari Ranjan Rao will be present at the inauguration of the travel mart at Hotel Lake View Ashoka. A B-to-B meeting will be held between the representatives from 10.30 am which will continue till evening. Useful discussion will be held at the mart in a similar B-to-B session on October 7 as well.