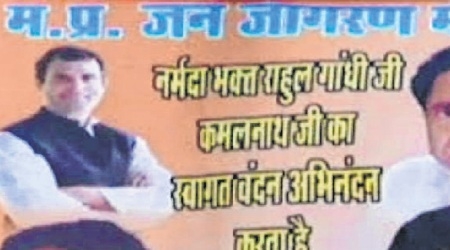 Congress leaders are showing its party president Rahul Gandhi in different shades suiting people’s religious inclinations. Congress is concentrating these days in projecting Rahul Gandhi’s soft Hindutva side. Rahul, who is arriving in Jabalpur on Saturday, is shown as ‘Narmada Bhakt’ (devotee of river Narmada) in posters. When Rahul had come to Bhopal, he was projected as ‘Shiv Bhakt’ in posters across the city. Rahul’s portrayal as a devotee of Lord Shiva was linked to his recent visit to Kailash Mansarovar. When Rahul visited Chitrakoot in Vindhya region, he was shown as ‘Ram Bhakt’.

Earlier, during election campaigning in Gujarat and Karnataka assembly polls, the party had worked on develop Rahul’s image of being a Hindu. Congress in the state is also projecting him on the same lines. Rahul, who visited Kamtanath Mandir of Chitrakoot in Vindhya region, may go to pay obeisance to river Narmada in Jabalpur. He would also inaugurate his tour to Ujjain by visiting Mahakaal Temple.

Congress hopes that developing image of Rahul of a Hindu will get them community votes. Congress is already not getting votes from upper castes for many years. To get Hindu votes in ensuing assembly polls, Congress is working on this as it had seen its benefit in the Gujarat elections.

Meanwhile, leader of opposition Ajay Singh defending posters of Rahul, said bhakti was not the sole right of the BJP. According to Singh, why do BJP leaders feel that only they were religious? On the other hand, BJP media-in charge Lokendra Parashar, criticizing posters of Rahul, said people very well know Congress, which had challenged the existence of Lord Rama by giving an affidavit. Parashar said Rahul may become anything but it would have no impact in the state.