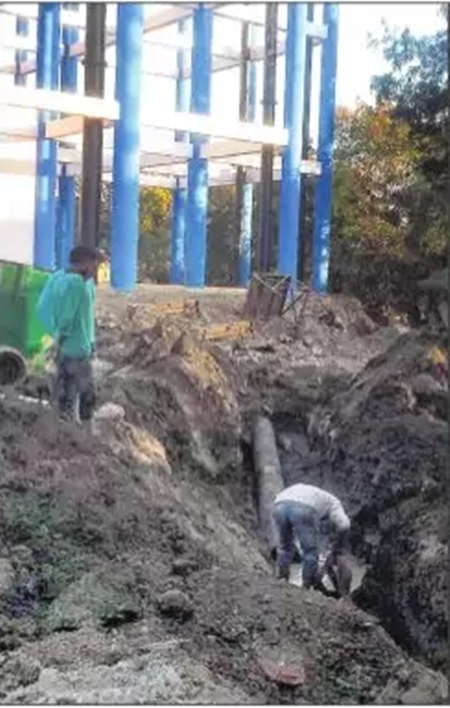 Bhopal: On the second consecutive day, pipeline supplying Kerwa water to Kolar area suffered leakage adding to the embarrassment of the BMC. On Monday, hours before the inauguration of the Kerwa water project, Kolar area witnessed water-logging on Monday as water pipeline burst during the testing. Bhopal Municipal Corporation (BMC) had fixed the leakage, however, on Monday night, the pipeline burst from the same spot again, damaging the telephones lines in the area. Residents of Lalita Nagar and those residing near main road Kolar had tough time due to water logging. Adding to their woes, the new leakage has damaged their telephone lines.

The project was inaugurated with much fanfare on Monday in presence of local MLA Rameshwar Sharma. Besides, the BMC which has been claiming to supply water in 2000 households in Kolar area will have to face the reluctance of people who are not keen in taking the water connection at such high rates. For single Kerwa water connection, the civic body is demanding Rs 5000 to Rs 10000 from residents, which they are not keen to pay. The residents are finding the connection rate too high and many of them have refused to take connection.

An RTI activist Manoj Tripathi, who had gone to meet BMC commissioner Priyanka Das said that the rate fixed for water connection in the area is Rs 1300 and we are demanding the civic authority to slash the rates. He also rubbished the claim of the authorities to supply water to 2000 household stating that there were not only 200 water connections in the society. AR Pawar, city engineer of the water works when contacted said that he is only following the BMC’s instructions and that the water works department has no role in fixing the connection rate.