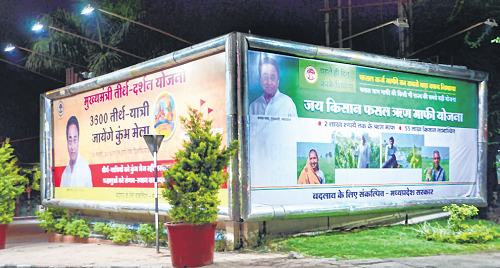 Bhopal: The Congress government which claims itself to be averse to publicity, is all set to launch an aggressive branding campaign after coming to power in the state. The branding of Chief Minister Kamal Nath is being done on the lines of ex-CM Shivraj Singh Chouhan.

To introduce people to Nath, 3000 hoardings have been put up across the state. Raths have been launched in all 313 blocks of the state to publicise farm loan waivers and are targeting Lok Sabha elections to woo people towards the Congress-led government.

The LED-fitted Raths will flash Nath’s pictures and will play his address. Crores of rupees has been set aside for this branding exercise. It is also aims to make people aware about the works done by Nath prior to code of conduct coming into effect.

The hoardings put up across the state display the works done, as promised by the party in its Vachan Patra. The hoardings of Kamal Nath have been put up at the places which where once spots for Chouhan’s branding. During BJP government, it was decided to keep Chouhan at the forefront.

The achievements of the government were publicized through hoardings and advertisements bearing pictures of Chouhan. The same strategy is being followed for Nath. BJP state vice president Vijesh Lunawat said, Chief Minister Kamal Nath claim that they do not believe in publicity is ridiculous .

They are spending crores of rupees in launching raths and installing hoardings, said Lunawat and called it all merely an attempt to gain publicity. He claimed that we have always said that there was gap between speech and action of Congress and now public is also coming to know it.

Congress media committee, vice president, Abhay Dubey said resources were being used to extend information to the people and there was no branding of face. Dubey said all the expenses of rally of AICC president Rahul Gandhi was born by Congress party organisation and not a single penny of the government was spent. He said it is also a proof that Congress wants probity in the government.