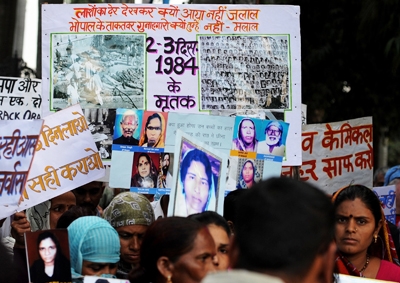 NGOs fighting for the rights of the Bhopal Gas tragedy survivors have demanded immediate action against concerned civic body officials for misguiding the Supreme Court. The activists alleged that the Bhopal Municipal corporation officials submitted a false affidavit in the apex court regarding quality of drinking water being supplied to gas affected area.

They also condemned the persistent silence and inaction of the chief secretary ‘on a matter as crucial as health of over 50, 000 people’. Talking to media persons here on Thursday, the members of four NGOs said that a formal complaint with required proof of wrongdoing was submitted to the chief secretary more than a month back but there has been no response on it till date.

Bhopal Group for Information & Action member Satinath Sarangi alleged the said BMC officials submitted a false affidavit in the Supreme Court. On August 30, during a hearing at Supreme Court on the matter of supply of piped drinking water to 42 communities known to be affected by groundwater contamination, the Bhopal municipal authorities knowingly submitted a false affidavit before the court, alleged Sarangi.

As directed by the apex court, BMC officials had collected samples of piped water from 42 communities on August 10 and sent them for analysis to the State Research Laboratory run under the Public Health Engineering Department on the same day.

The lab report received on August 14, showed presence of faecal-coliform in over 70 per cent of the water samples, said Sarangi citing the findings. In two samples the faecal coliform, which is indicative of disease causing bacteria, was found to be 2400 times the permissible limit, and this was clear evidence of contamination of drinking water with sewage, he said.

Following this adverse report, the same BMC officials secretly collected another round of samples from the same 42 communities on August 18 and sent them to their own Quality Control (Water) Laboratory whose results showed that all the samples were free from faecal coliform, alleged Sarangi.