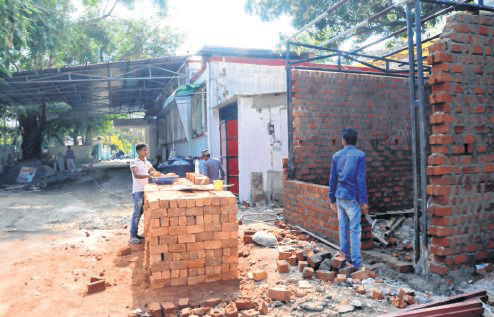 Bhopal: Kamal Nath-led government claim to have inherited empty coffers from the previous BJP government doesn’t seem to hold water as CM cabinet colleagues are busy burdening the state exchequer by spending crores on renovation and decoration of their bungalows.

The current financial situation of state is not very sound as it is reeling under heavy debts and to add to this farm loan waiver scheme would cost the Congress government a bomb. However, keeping asides all these limitations and considerations, ministers, almost all are getting makeover of their official residence right from structural changes to interiors and furnishings.

To get the new look to these bungalows, the public works department is all set to spend around Rs 3.50 crore on renovation and beautification. Chief Minister had called on his ministers to ‘lead a simple life’ and save government’s money, but the instructions went unheard.

Almost Rs 10 lakh each is being spent a bungalow, of this Rs 5 lakh is kept aside for electric fittings and furniture. There are 28 ministers in Nath cabinet. Soon after allotment of portfolios, the ministers went looking for their ‘dream bungalows’. Even after getting allotment of the house of their choice, the ministers as expected, found something or other wrong with the residence.

Not happy with the old construction and the interiors, the ministers directed the officials to give a makeover to their bungalows. The officials are on the toes to please the minister and bring alive their ‘dream house’. While come did not like the tiles, there were others who found fault with the Vastu, and then there are some who want the entire interior to be changed.

The PWD is busy placing new floor tiles of minister’s choice in the bungalows. In some bungalows, even doors and windows are being changed. Abiding by Vastu rules, ministers have spelt their colour choices, some are even keen on highlighting particular wall.

After the structural changes and renovations, the work of electric fitting and interior decoration, off course to the ministers’ taste, would commence. New air conditioners of bigger capacity are to be installed at the official residences. Coming to the furnishings, the ministers are even picking curtains, sofa set, dining table and other furniture of their taste.

Finding house plan and accommodation not up their requirement, five ministers have demanded one office and an extra room in their respective bungalows. Revenue minister Govind Singh Rajput, women and child welfare minister Imarti Devi, energy department minister Priyavrat Singh, rural development minister Kamleshwar Patel and excise minister Pradeep Jaiswal have informed the concerned officials about the requirement. The department has submitted proposal of Rs 50 lakh for the aforesaid construction.