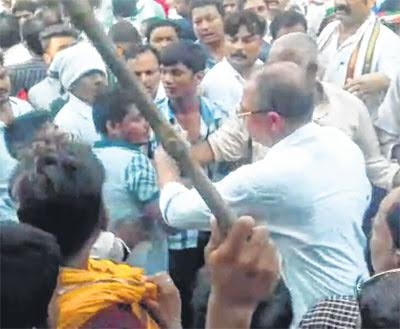 Bhopal: The government is conducting investigations against Sagar municipal corporation mayor in a corruption case and four months have passed, no report has been filed, said leader of opposition Ajay Singh while addressing farmers and party workers at Sagar on Monday. The BJP is supporting tainted public representative, he added.

The Congress party have taken farmer’s movement as a advantage for the party and party MP Jyotiraditya Scindia had staged a Satyagraha in Bhopal. After the Satyagraha, a Kisan Mahapanchayat at Khalghat in Khargone district was organised.

Sagar mayor Abhay Dare had purchased ticket for mayoral election paying Rs 8 crore and again to remain on the post, Rs 16 crore will be paid, Ajay Singh alleged. The chief minister has sold every valuable wealth to his own members – the sand of river Narmada to his family members. In Vyapam he gave services to people of other states leaving state domicile unemployed, Singh said. This government has given only scams – like Simhasta scam, toilet scam, aganwadi food supplement scam – to the people.

Arun Yadav alleged that during the Lok Sabha elections, Narendra Modi had promised that they will give 50 percent benefit on the MSP to farmers and had also promised to waive off farmers’ loan. But three years have passed and the PM has forgotten his promises, as result the farmers are facing serious problems and ending their lives.

One of the Congress supporters who was trying to cross the barricade and allegedly trying to attack policemen was pushed back and thrashed by Ajay Singh. Latter, he stated that he is not a Congress party worker. However, supporter Bharat Rai was accompanied by NSUI activists and had participated in the demonstration.