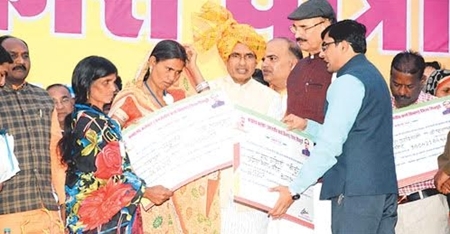 Shivpuri: Chief minister Shivraj Singh Chouhan, addressing the Saharia Vikas Yatra function at Excellence School, Kolaras, announced that a sum of Rs 4.5 crore will be transferred on monthly basis into the bank accounts of women of the families of Saharia tribe residing in the district. This will help to combat malnutrition. Chouhan said a bus stand costing Rs 2 crore will be built at Kolaras and a 10-bed hospital will come up at Lukwasa. A stop dam will be constructed at Bhadota on Sindh river. Chouhan announced that the poor families will be allowed to pay Rs 200 per month as electricity charges and their meters would not be read. Minister for public health and family welfare and district in-charge Rustam Singh presided over the function. Minister for tribal affairs Lal Singh Arya was the special guest. Chief minister got Rs 1000 deposited in bank account of women heads of 18,000 Saharia families.

Chouhan announced that Saharia families will be given wheat, rice and salt at the rate of Re1 per kilogram while daal will be provided at the rate of Rs 10 per kilogram. It is for the first time in the country that each family belonging to Saharia, Baiga and Bharia tribes will be given Rs 1000 monthly with the objective to end malnutrition, he said.  MLA Prahlad Bharati, district BJP president Sushil Kumar Raghuvanshi, former MLA Makhanlal Rathore, Devendra Jain, Virendra Raghuvanshi, Omprakash Khatik, Ramesh Khatik, additional commissioner, Gwalior division, Sunil Kumar Pandey, Mahesh Adivasi, corporator Lalji Adivasi and local people were present.

After the publication of a report on the mismanagement at a similar function at Ranaud on December 21 in Free Press, the administration ensured that proper arrangements were in place in Tuesday’s function. Drinking water was available and so were temporary toilets. Changing rooms were also arranged for the artistes who performed at the cultural show that formed part of the function.