After Congress and Bahujan Samaj Party (BSP) not entering into alliance, the possibilities of BSP getting more seats in the ensuing assembly polls are rife. The BSP played spoilsport for Congress on 30 seats in the last polls.  The votes of BSP on these seats could have led to Congress victory. The BSP is known to have good standing on some seats of Bundelkhand along with Gwalior, Chambal and Vindhya regions. BSP got its presence felt on the seats in these regions in last elections. BSP won 5 seats in 2013. It also got good number of votes on several seats.

Going by statistics of last assembly polls, the performance of BSP, in terms of percentage of votes, was the weakest. It is expected that its performance will improve this time. It is also said that BSP not entering into an alliance with Congress would significantly hit latter’s poll prospects. 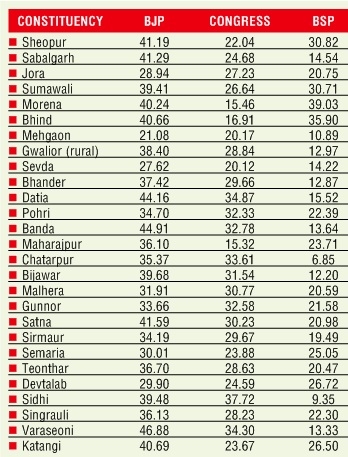