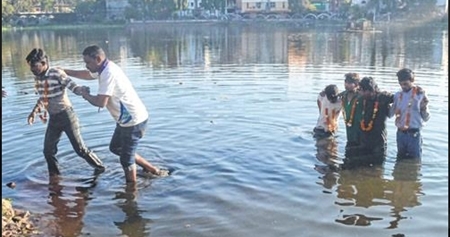 Bhopal: Braving the biting cold, visually challenged staged a ‘Jal-Satyagarha’ at Lower Lake on Tuesday to press their 23-point demands including direct recruitment appointments to 8,000 backlog posts. Protesting under the banner of Dhrutihin Berojgarh Sangharsh Samiti, the Divyanga are also observing serial hunger strike.  These specially abled persons have been staging sit-in since December 18, however, no government representative ever visited the site or lent an ear to their grievances. It was only on Tuesday when the news was flashed on media that the protesting Divyangs have now resorted to Jal-Satyagarh that the government woke up from the slumber and took notice of their protest.

Standing in deep waters of the lower lake at Neelam Park, the Divyangs are also demanding construction of hostels for the students in college at state and divisional level and free public transportation.  Five disabled—Chandra Bhan Patel, Santosh Bisen, Barkatullah Ansari, Anand Bagari and Anant Patel—staged Jal-Satyagarha till 5.00 pm. Heavy police force was deployed in the area. As soon as the news was flashed on the media at 8.00 am about the Jal-Satyagarha, MoS for cooperatives Vishwas Sarang rushed to the site to hold talk with the protestors. However, minister failed to convince them to end their agitation as the protesters bluntly told him that assurances would not work this time. After talks with minister failed, teams of Madhya Pradesh State Disaster Emergency Response Force (SDERF) were positioned on boats throughout the day to avert any untoward incident.

At a team of district administration led by ADM GP Mali, ASP Dharam Singh also tried to convince the protestors to come out from the water, but in vain. At 4. 00 pm, a team of doctors took a boat to the agitators and examined their blood pressure (BP) as they had refused to withdraw their Jal-Satyagarha before the set 5 pm deadline. One of the protestors, Anant Patel was convenience to come out of the lake as he had developed fever. He was taken to JP Hospital for treatment. At the site, entire administration waited for the deadline to end. When the remaining four ended their agitation they were taken to J P hospital for medical checkup. The protestors will continue to stage sit-in at Neelam Park.

Dhrutihin Berojgarh Sangharsh Samiti’s Manish Sikarwar said that they will continue their protest till their demands were fulfilled. “Every time, government has befooled us. This time, we are adamant and we will intensify our protest in coming days,” he said. Hinayat Ansari, another member of the Samiti, alleged that administration wants to quell our agitation but we will not succumb to their pressure tactics. We will continue our strike in peaceful manner, he added.

“High Court in 2013 had instructed the government to clear the backlog by constituting board for disabled. But government did not take the direction seriously and only did the formalities by recruiting a few. Still 8,000 posts in various departments are vacant,” informed Ansari.

Minister along with district collector Sudam Khade, ADM GP Mali, SDM Milind held talks with the agitators and assured them to fulfill their demands. However, the talks failed and the protestors even turned down minister’s proposal of setting up of a committee to consider their demands. The agitators are not ready to take any assurances from anyone anymore.

MoS Vishwas Sarang said: “Government has already fulfilled most of the demands like construction of hostels. And for jobs, we remain committed. And despite my assurance of constituting a committee comprising specially abled member, the protestors are unrelenting. However, I am still hopeful that the agitators will seriously consider our proposal.”

ADM GP Mali said: “Permission for staging protest at the site has not been granted. Administration is keeping a close vigil as they have assured peaceful demonstration. Today, they staged Jal-Satyagarha but tomorrow if they go for it again or intensify the agitation, administration will not allow it.”