The barricades in and around the city are not only causing trouble for people who are going out for genuine reasons, but also for those manning the emergency services like fire brigade and civic body employees.

A road barricaded at Roshanpura Square in the state capital, Bhopal, during the lockdown on Sunday. | FPJ
Advertisement

BHOPAL: The barricades in and around the city are not only causing trouble for people who are going out for genuine reasons, but also for those manning the emergency services like fire brigade and civic body employees.

It is leading to altercations between the police and BMC employees and in one case it even led to a scuffle when the BMC staff tried to cross a barricaded road.

Police have sealed a few roads and have put up barricades on some others. But, due to the sealed and barricaded roads, people are having a tough time reaching their destination and are often moving in circles. What is worse, there are no signboards to point which roads the people can use. Danish Siddiqui, in-charge of Covid ambulance in the BMC says a driver Mohammad Faiz was assaulted by cops in Shahjahanabad when he asked the policemen to let him go through a barricaded road. The cops refused to remove the barricades even when he was in an ambulance of Bhopal Municipal Corporation (BMC). Siddiqui says Faiz was returning after cremating a body when the cops stopped him. They first abused and then assaulted him when he asked the cops to open the barricades. “They should at least allow those in essential service or emergency vehicles to use the road,” says Siddiqui.

Mohammad Furkan, a fireman says the sealed roads are totally barricaded and as no cop is deployed there we have to use alternate routes but that is also a challenge as we have no idea which road is open for us, he says. It only delays our services, added Furkan.

On Tuesday, two drivers of BMC were roughed up in two separate incidents by policemen in TT Nagar and Gautam Nagar areas when they tried to use a barricaded road. They were taken to the police stations but were released after civic body officials intervened. The videos of the incidents went viral on the day.

Shazeb Khan, a garbage collection employee in BMC says the cops do not allow them into the barricaded colonies even when they have been instructed to collect waste from all around.

Khan says the barricades delay their work but their own seniors scold them for the delay. He says the policemen misbehave with them when they insist on using a barricaded road and it often leads to altercations. 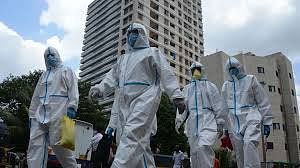