The building was spread over an area of 5,000 square feet.
Staff Reporter 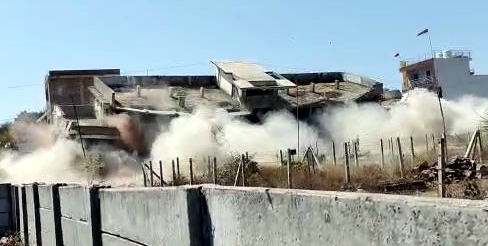 Bhopal: Teams of Bhopal Municipal Corporation (BMC), on Saturday, carried out a blast in a building to demolish it. The action involved a building owned by a land mafia in Jansahyog Colony at Gopal Nagar.

The building was owned by land mafioso R Rawtani and had to be razed by the blast. The building was spread over an area of 5,000 square feet. BMC had called in explosives expert Sarwate to carry out the blast.

The residents of the locality were asked to stay indoors until the drive was over. Usually, blasts are carried out in overhead tanks and it was an unusual sight for the locals. The teams were announcing that everyone around had to stay away from the site.

The teams of police from nearby police stations were also deployed at the site. The officials drilled holes and filled in explosives in the building around noon.

Before that, the area was evacuated and the police team cordoned off the area. BMC officials were repeatedly announcing that everyone should stay indoors and doors and windows also should be shut to avoid any harm. The blast was carried out around 12.30 pm and the three-floor building fell to the ground.

The state government has ordered action against the land mafia and the district administrations have been razing different illegal structures all around.