BJP and Congress have a face-off over the inauguration of a building of a library at No. 5 in Bhopal on Tuesday. |

BHOPAL: The workers of the BJP and the Congress had a face-off before the inauguration of a building meant for a library at No. 5 on Tuesday. Bhopal Municipal Corporation (BMC) had developed the building at a cost of Rs 72 lakh. The matter escalated to such an extent that the police had to use force to drive the Congress workers away.

The building of the Pandit Sheetal Prasad Tiwari Library was to be inaugurated by the minister for urban development, Bhupendra Singh, in the presence of local MLA PC Sharma. However, the BMC officials had missed out on the name of former Congress corporator, Yogendra Chauhan, and instead written the name of former minister Umashankar Gupta.

Former minister and MLA PC Sharma and his supporters gathered at the spot and raised allegations that the BMC was missing out on the name of the local corporator from the foundation stone. 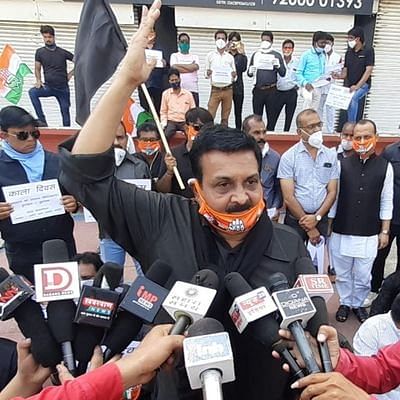 On the other hand, the BJP workers also raised slogans against PC Sharma and the Congress for trying to falsely take credit for the library inauguration. The Congressmen, however, alleged that the BMC officials had invited former MLA Umashankar Gupta, who in no way deserved to be there.

The sloganeering continued until minister Singh arrived with Gupta and went inside the building for the inauguration. It was then that the cops wielding lathis drove the Congress workers out of the premises. Congress women’s wing district head Santosh Kasana said the cops even used lathis to hit the women workers. She said they would seek the intervention of the human rights commission in the incident.

Bhupendra Singh said that the Congress workers were behind the ruckus as he was the minister and the project was finished by the civic body. Sharma said the BMC commissioner was working under pressure from the BJP.