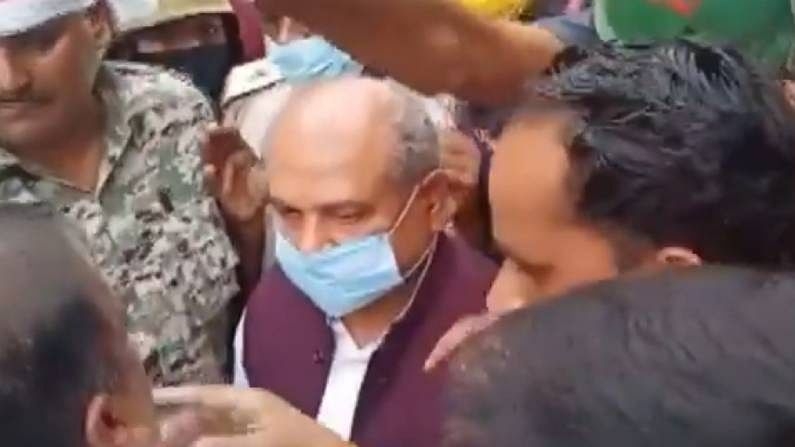 Bhopal: The state government has removed the collector and the superintendent of police of Sheopur district. The government's order came on Sunday in the wake of an incident in which some people protested against Union Minister Narendra Tomar on Saturday when he was visiting the flood-hit areas in the Gwalior-Chambal region.

SP Sampat Upadhaya was shifted to the police headquarters in the state capital as AIG. Collector Rakesh Kumar Shrivasta was shifted to Mantralay as deputy secretary. Commissioner of Gwalior Corporation Shivam Verma will be new collector of Sheopur. AIG posted to the police headquarters Anurag Sujania will be the new SP of Sheopur. Congress leaders criticised the shifting of the officials from Sheopur. In a tweet, Congress media coordinator Narendra Saluja said had the officers shown any negligence in relief and rescue operations, they should have been removed. But they were removed because flood victims' family tried to put up their problems before the minister.The flood victims held a demonstration in front Tomar in Todi Ganesh market area in Sheopur on Saturday. Tomar accompanied by a few officers of the district arrived at Sheopur to take feedback on flood victims. As soon as the minister's cavalcade reached Todi Ganesh Market area, some people of the market surrounded the minister's vehicle. The women members of the flood-hit families laid themselves in front of Tomar's car demanding financial aid from him.The chief municipal officer of Sehopur Nagar Palika Mini Agarwal has also been removed from the post. She was appointed as an assistant commissioner of Gwalior Municipal Corporation. The CMO of Hatta Nagar Pakila BD Kartolia has been appointed as a CMO of Sehopur Nagar Palika.