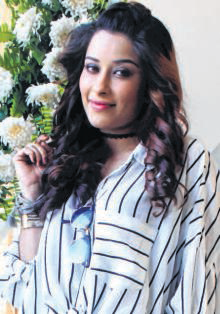 Bhopal: Film and TV actor Nyra Banerjee was in the city to promote her first debut upcoming Star Plus show Divya Drishti on Friday. Blessed with gift of gab, the two sisters have one superpower each, which can change the course of events. Divya and Drishti played by Nyra Banerjee and Sana Sayyad have distinctive powers that make them special.

However, destiny has other plans for them and they get separated in their childhood. To be the most prevailing when it comes to their powers, they must be together. Banerjee told media persons at Courtyard by Marriott, “When I used to see Shaktimaan in childhood, I used to think that it is for real.

And I wanted to do something similar. Now I got a chance to play my childhood desire in the show, I love and believe supernatural powers.” She said, “No one in my family is in the glamour world. I have studied law. When I was in college, I started getting offer for modeling and acting I gave many look tests for the role. . I didn’t learn acting. Besides acting, I love to painting and dancing. I do painting on Chakras.”

“I want to play a role of naval officers and lawyer,” the actor said. Banerjee who plays Divya on the show says, “The show has a unique concept which brings forth extra-ordinary super powers like never seen before on the small screen. I am extremely excited to play Divya on the show. I’m very excited to be in the city of Lakes as it is my first time here.”