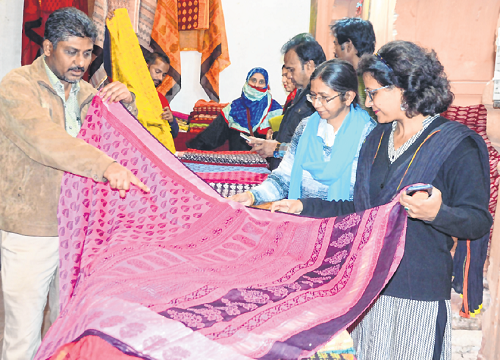 Bhopal: Bagh Mahotsav at Gauhar Mahal has come as succour to the disheartened artisans who failing to get space at popular fest like Lokrang had to return disappointed. The artisans showcasing their products at the on-going Bagh Mahotsav in Gauhar Mahal are overwhelmed with the buyers’ response.

Mohammed Bilal Khatri, an artisan from Dhar told Free Press, that this is fifth year of the Bagh expo. Many artisans and craftsperson on failing to get space to showcase their products at Lokrang had to leave disappointed but with the launch of Bagh Mahotsav, things have changed for a good.

Disheartened artisan had even decided to switch profession for bread and butter as they failed to get space to showcase their work at prominent platform like Lokrang, informed Khatri. They took loan to come up with their products but couldn’t get anything in return as they failed to get spot at Lokrang to showcase their work to buyers, said Khatri.

“Then my father Noor Mohammed Khatri took up the matter of the distressed artisans to former MD, Hastshilp Vikas Nigam, Veena Rana and even gave a proposal for setting up an exclusive expo. The officer liked the idea and she ordered to hold the fest as soon as possible. The expo has proved a big platform for the artisans,” said Khatri.

“We are getting good response from visitors even better than the Lokrang. This year, the sale in Lokrang was very down. In the expo, we have set the targeted if Rs 15 lakh, and till now we have made sale of Rs 10 lakh and still one day is still left.Khatri has showcased sari, suits, jackets and bed sheets in Bagh print. “The demand of bed sheets is more. We had stock of 450 of which only 80 pieces are left,” he informed.

“Here, our sale is good. We have sold our items of Rs 8 lakh. The dress material for Kuri in Dabi design was liked by buyers. Yes, it was down for three days (from January 28 to 30) due to ‘Lokrang’ . Now, the sales are good,” said an artisan Ayub Yakub Khatri from Dhar.

An artisan Sajaouddin Yakub Khatri from Jobat, Alirajpur said, “ we have bough Mahehwar saris in silk, cotton, chiffon, Georgette in Dabi design. Its price starts from Rs 1000 to Rs 4500. We are getting good response.” “My father is national award winner but we don’t get space at big exhibitions like Lokrang and Suraj Kund.

We have been applying for for space at these expo for last four years,” said artisan Yusuf Ibrahim Khatri. He, however, was not much happy with the sale saying that till date he could only sold items of Rs 4 lakhs. Organised by Sant Ravidas Madhya Pradesh Handloom and Handicraft Development Corporation and sponsored by commissioner Handloom and Handicrafts, government of MP, the expo began from January 15. It will remain open for visitors till February 1.