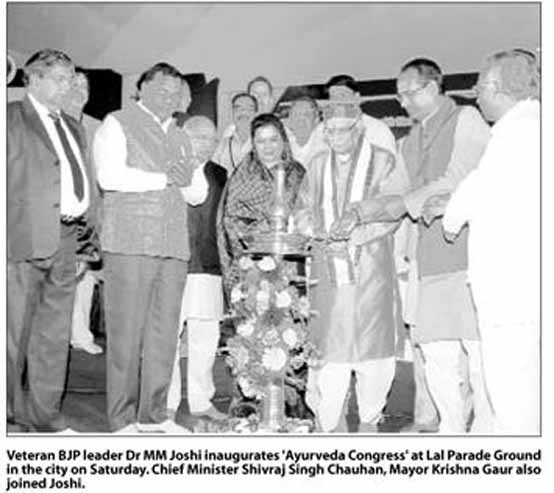 BHOPAL: Former Union Minister Murli Manohar Joshi claims that country’s trade deficit can be bridged through ‘ Swadeshi’ products, oga and Ayurveda. For this, the Patents Act should be suitably amended. Joshi said that effective and easy treatment facilities can be made available to the world through Ayurveda. In Ayurveda, there is a concept of holistic cure, including that of body, mind, intellect and soul. He said that every student of medicine science should study Ayurveda. Such amendments should be made in country’s law, which facilitate trade in Ayurvedic medicines.

Joshi was addressing the inaugural function of the Fifth World Ayurveda Conference here on Saturday as chief guest. Speaking on the occasion, Chief Minister Shivraj Singh Chauhan said that a State AUSH Control Programme will be implemented in Madhya Pradesh under which Ayurved and naturopathy will be promoted. Commerce, Industries, Science and Technology Minister Kailash Vijaywargiya, Public Works Minister Nagendra Singh and Minister of State for Health Mahendra Hardia were also present.

Patients are being provided free consultation and treatment at the conference venue at Lal Parade Ground. Chauhan said that Ayurveda was an ideal and simple system of medicine which eradicates root cause of disease. AUSH Wings will be started in all government hospitals in the state. He said that Ayurved is considered the fifth Veda in our culture. Disease- free body was the key to happy life Every possible assistance will be extended for producing quality Ayurved medicines, research and study. National Chairman of Vigyan Bharti Dr. Vijay Bhatkar also addressed the function.

Hundreds fetch up at Aryogya Expo

Hundreds of people fetched up at Lal Pared Ground take benefits of Arogya expo that provided them treatment for various chronic diseases, like diabetes, heart and stomach ailments. At the expo, various types of ‘ Bhashmas ( powder)’, which are mainly used to sharpen memory and arrest aging process, flooded the fifth world Ayurveda congress and Arogya expo at Lal Parade Ground on Saturday.

All the Chyawanprash contains swrana bhashma, silver, keshar and safed musli,. Replay capsule for men and eve capsule- were on display. Similarly, gentle cream and gentle capsule of Ajmera Pharmaceuticals Private Limited, Indore, are also available. Anti- aging Rahashahi Chawanprash of Unjha Pharmacy and ‘ Keshri Gulkand’ are selling like hot cakes. Biggest- B capsules and Biggest- B Lotion of Peekay Pharma are also in demand. Kaucha Pak ( spermatogenesis) for men and Garbhadhani Vati ( for women) of Sanskar Aryurved Pharmacy, Vajitone, shoot for women and 303 for men of Shreedeendayal Company are also on sale.

T he Central Council for Research and Naturopathy and Morarji Centre for oga treated those who are suffering from diabetes and heart ailments. A sum of Rs 40,000 per stall has been charged from the companies who have put up their stalls at the exhibition.

A rogya expo evoked more response than the Ayurveda congress. People even visited the yoga centre for treatment of various diseases like diabetes, backache and joints pain.