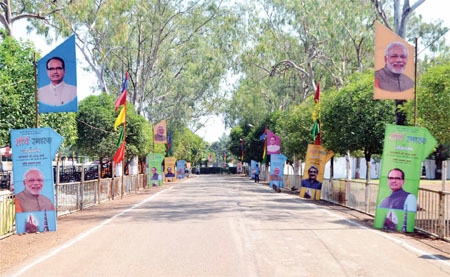 BHOPAL: The State Transport department has seized around 750 buses from around the state to ferry audience to the PM’s public meeting on Friday.

Modi, along with defence minister Manohar Parikar and chief minister Shivraj Singh Chouhan will address the public meeting at Lal Parade Ground in the evening. Besides ex-servicemen, others will also be present.

The State Sainik Welfare Board has invited around 8,000 ex-servicemen through SMS and newspapers. They will be brought to the meeting venue in buses.

The district collectors and the BJP district presidents have been instructed to bring maximum number of people for the meeting. At the ground, seating arrangements have been made for 40,000 persons.

The district Sainik Welfare Board Bhopal has sent out 30 invitation cards to ex-servicemen of brigadier and higher ranks.

Among the invitees are one Lieutenant General, one Major General, one Air Commodore, one Navy Commodore and 20 brigadiers. Two more officers who have won Gallantry Award have also been invited to the Shourya Smarak inaugural function. The prime minister will inaugurate the Shourya Smarak. He will be accompanied by governor OP Kohli, defence minister Manohar Parikar, and chief minister Shivraj Singh Chouhan.

PM Narendra Modi programmes can be seen live at 5 places

Arrangements have been made for live telecast of Prime Minister Narendra Modi’s programmes at five places of Bhopal city. Live telecast of Ex-Servicemen convention, Shaurya Samman Sabha and dedication programme of Shaurya Smarak will be made.