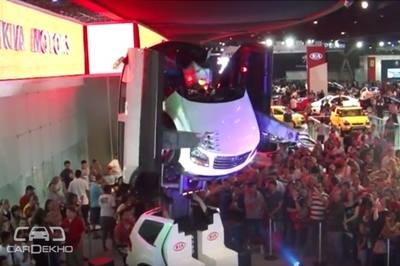 Automakers are known to play with their products worldwide. Motor Shows hosted all around the world are true witnesses of the same. But Kia Motors has done something which might compel you to rethink about what innovation is. The South Korean carmaker has reached another level and revealed a TRANSFORMER! YES! If we have to believe our eyes, this is very much true. Check out the video below and decide what you wanna call it!

The car put under test was Kia’s SUV, Borrego. As you could have seen, the ‘transformer’ is named as ROBOKIA! Well, it very much suits the hi-tech machine. The company showcased the same at São Paulo International Motor Show, but it is never too late to see such things!