What if Pawar-Modi deal had indeed taken place!

The timing and nature of NCP chief Sharad Pawar’s claims that Prime Minister Narendra Modi approached him to form an alliance with the BJP (after the Shiv Sena refused to support a BJP-led government in Maharashtra) has not just raised eyebrows. It may be also a pointer to the possibility and non-feasibility of such permutations and combinations in the future.

Firstly, Pawar’s claims give handle to critics who see an opportunity to expose what they would call the BJP's hypocrisy in showing willingness to do business with the very people whom it accuses of gigantic corruption.

Pawar’s decision to go public with Modi's proposal is seen as yet another shrewd move to prevent the BJP from coaxing his nephew Ajit Pawar to attempt another coup a few months later.

What is more ominous for the BJP is Pawar’s assertion that his nephew Ajit Pawar realised that the family did not approve of his action to join hands with the BJP and came to him to apologise. “Ajit Pawar told me that he had made a mistake and was ready to suffer the punishment,” he said in the interview to a Marathi channel, adding that there was a big section among NCP workers that felt Ajit Pawar should be “pardoned” since he had accepted his mistake.

Pawar also reinforced the widely-held view that Ajit Pawar came back to the NCP fold when he realised that he did not have support and there was enough pressure on those MLAs with him to follow suit.

Ajit Pawar failed to make it to the first lot of NCP leaders to be sworn-in on Pawar’s discretion. His nephew could not be made “an exception to the mistake he had committed and had to bear the consequences.”

Pawar’s disclosures throw light to a very important episode in the drama involving formation of government in Maharashtra after the polls.

Tongues started wagging when Pawar met Modi in his chambers in Parliament House on November 20. This was at a time when talks between the NCP, Congress and Shiv Sena were on full swing for forming an alliance. It happened three days before Ajit Pawar joined hands with the BJP to prop up the short-lived government of Devendra Fadnavis.

The Pawar-Modi encounter set off a lot of buzz about the nature of their discussion at that point of time. No one really believed that they talked only about the plight of farmers in the state.

Three days after the meeting, Fadnavis was sworn in as Chief Minister with Ajit Pawar as Deputy CM in the early morning shock-and-awe ceremony in Raj Bhavan. There was reasonable amount of suspicion that it had a tacit nod from the senior Pawar.

“How could Ajit Pawar join hands with the BJP without senior Pawar’s nod?” was the first response from many leaders.

Adding to the mystery was the “delay” supposedly on the part of the senior Pawar — as noticed by some senior Congress leaders — in sewing up matters with the Shiv Sena. The reason was that Sonia Gandhi had already by then given green signal for a hitherto unthinkable coalition with a Hindutva-drenched party.

The difficulties faced by the NCP and the Congress over sharing key ministries under Uddhav Thackeray buttressed the possibility of new alignment with the BJP.

True, Pawar also admitted (in the TV interview) that he knew Ajit Pawar was talking to Fadnavis. But his contention that he was not aware of his plans to back the BJP. “I knew that Fadnavis had given the offer of an alliance to Ajit. I had told Ajit to see what BJP was talking about. Later, I got busy and then my talks with Sena got serious. I also got a clear signal from Sena MP Sanjay Raut that they were willing to join us,’’ Pawar said.

But, when the consequences of the “rebellion” by Ajit Pawar begun to sink in on the NCP’s first family, Sharad Pawar tightened his grip over the party. The net result was that the political adventurism of the BJP stood ravaged.

By making disclosures about his talks with the PM four days after the Maharashtra Vikas Aghadi got installed, Pawar has gone further in putting the BJP in a tight spot and foreclosing its options in the near future.

The BJP cannot think of another alliance with the NCP under Ajit Pawar so easily in the next few months — even if the terms of endearment within the Aghadi were to come apart.

What if Pawar-Modi deal had indeed taken place! Of course, the BJP would have argued that it had gone for a much stabler alliance and Supriya Sule could be on her way to become a minister under Modi’s dispensation at the centre.

But that was not to be as Pawar had willed it otherwise. In an insulation exercise to her father’s outspokenness, Sule has said it was "magnanimous" of the PM to offer to make her a minister but her father had "humbly" said no. No wonder, politics remains the art of the impossible.

The writer is a former Senior Associate Editor of Hindustan Times and Political Editor of Deccan Herald, New Delhi 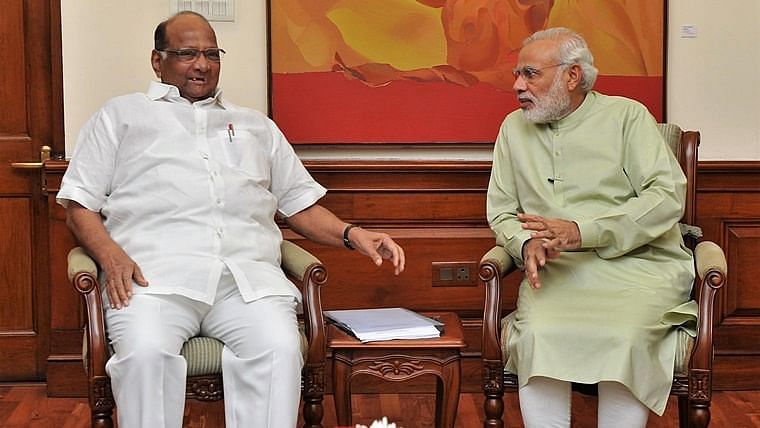