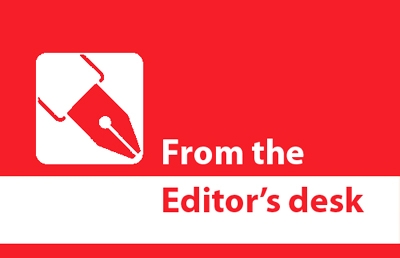 From the Editor's desk |

The dismissal of Union Home Secretary, Anil Goswami, should serve as a warning to all bureaucrats to toe the straight and narrow path of rectitude and propriety. It is also a reaffirmation of the Modi Government’s resolve to restore the rule of law at the highest level, as also a reiteration that it would not brook any breach of the proper norms and rules of governance. Contrary to the set-piece criticism from the Congress and other such quarters, the dismissal of Goswami a few months before he was due to retire, and, a few days earlier, the ‘curtailment’ of Foreign Secretary Sujatha Singh’s tenure were correct steps. Both were meant to advance the larger public good. In the case of Goswami,  the facts are simple. He tried to misuse the considerable influence attached to his official position to try and help Matang Sinh, a former minister in the Narasimha Rao. Sinh was under the CBI scanner for his role in the Saradha chit fund scam. He was to be interrogated a few days ago. Goswami phoned up the CBI Director Anil Sinha to ask the latter to allow Sinh to go scot-free, despite there being clinching evidence of his involvement in the scam. First, Goswami tried to see if Sinh could be spared any interrogation. When that failed, he wanted the CBI to interrogate him in Delhi, instead of Kolkata, where the local CBI unit is investigating the scam. And once the CBI summoned Sinh for interrogation in Kolkata, and after eight hours of grilling it decided to arrest him, Goswami took a call from Sinh wherein the latter asked him to ensure that he was not arrested. Immediately, Goswami phoned the CBI director, asking him not to arrest Sinh. On its part, the CBI duly recorded the conversation Sinh had with Goswami from Kolkata and, later, the conversation he had with Sinha. The tell-tale tapes were given to the Union Home Minister. That sealed Goswami’s fate. Not many people would be aware that what Goswami did was not unusual. It was routine for such highly-placed officers to throw their weight around in order to protect people for various considerations, including money. Though money many not be involved in Goswami’s case, it was widely known in the capital’s bureaucratic circles that Sinh used the home secretary to get his favourite officers in various branches of the government plum postings. Goswami was a regular when Sinh held court in his house in Delhi. An unsavoury character, Sinh had all along enjoyed easy access to the corridors of power, thanks to his proximity to officers like Goswami. Admittedly, Goswami might consider himself unlucky that he had to contend with a prime minister like Modi, who takes a dim view of any misconduct, whether it is by his own ministerial colleagues or a senior bureaucrat. Previous home secretaries, including those whom the UPA Government had rewarded with post-retirement governorships, were notorious for pulling strings for all manner of unsavoury people. The prompt dismissal of Goswami signals to all concerned not to misuse their official position. As for Foreign Secretary Singh’s curtailment of service by a few months, it became necessary for otherwise, the country would have been deprived of the services of a brilliant diplomat, S. Jaishankar. He was to retire in a couple of days’ time and no retired officer can head the India Foreign Service. Anyway, Singh had become Foreign Secretary only after her father, former Governor T.V. Rajeshwar and Sonia Gandhi had overturned Prime Minister Manmohan Singh’s decision to appoint Jaishankar as Foreign Secretary and dictated that Singh be  appointed instead. Seniority cannot be allowed to become the enemy of merit, at least at the highest levels of officialdom.

With friends like these, who needs enemies?  Whatever the merit in the complaint that a recent comedy show in Mumbai went overboard, often treading the line that separates humour from vulgarity, the reaction of Ashok Pandit, the loudmouth made a member of the Central Board of Film Certification a few days ago, was unacceptable. Pandit himself crossed the line of decency while abusing the participants in the show watched live by some four thousand people and, later, by tens of thousands on YouTube. Humour, no doubt, is not everyone’s cup of tea. It is far more difficult to carry the audiences in a comedy show than in any other live act. Admittedly, ‘The AIB Knockout’, which ribbed/roasted a few Bollywood celebrities, failed to

always stay within the boundaries of propriety. Yet, that should not warrant punitive action by the Maharashtra Government and a foul diatribe by a member of the CBFC. Viewers are intelligent enough to judge such shows. If they find them vulgar, they will turn their backs on them. Leave them well alone.