Uttarakhand: Let us learn to live with forest fires 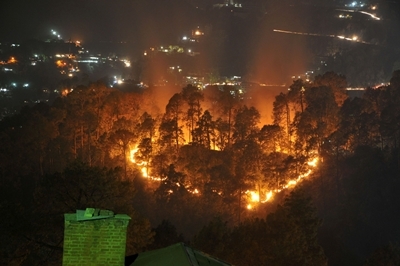 Wildfires burn through jungle near the northern hill town of Shimla in the Indian state of Himachal Pradesh on May 2, 2016. Thousands of labourers backed by water-carrying helicopters were battling to control fires that have killed two people in India's northern Himalayan state of Uttarakhand, officials said May 1. Fires have swept through more than 1,900 hectares (4,700 acres) of forest but have so far not threatened towns in Uttarakhand which draws tens of thousands of tourists every year, officials and media reports said. / AFP PHOTO / STR |

There is a small mountain in front of my house in Uttarakhand. Women of the village make a huge effort to burn the grass every year. They light up the grass and if it does not spread, they gather more grass and light it up again. They continue hours of hard labour trying to burn the grass. They say new grass grows better and quicker once the rains fall if the grass has been burnt. Forest officials confirm this perception of the village people. They tell that certain types of grass have knots in their roots. These are called rhizomes. Such plants are much benefitted by a small fire. It works somewhat like the heating pad works on our body. A small fire burns up the plants but gives vigour to the roots. These plants grow afresh much stronger after a fire. The process is similar to the burning of sugar cane fields after harvesting. The heat from burning gives energy to the roots and new shoots come up. Studies by agricultural scientists also confirm that lighting up the sugar cane field after harvesting improves the yield of the next crop.

A small fire burns up the plants but gives vigour to the roots. These plants grow afresh much stronger after a fire. The process is similar to the burning of sugar cane fields after harvesting. The heat from burning gives energy to the roots and new shoots come up. Studies by agricultural scientists also confirm that lighting up the sugar cane field after harvesting improves the yield of the next crop.

This type of low fire does not harm the trees. It burns near the ground. The tree trunks are blackened but their leaves remain green. This burning is good for all the stakeholders—the grass, the trees and the human beings. The fact that the grass grows and is burnt every year means that the practice is “sustainable.” This practice is not limited to India. A post on About.com says that Native Americans used forest fires to increase the growth of grasses that attracted wild animals which they could hunt.

Fire is part of the natural process. A report by the Conservancy Global Fire Initiative says that many plant and animal species have evolved in the presence of fire. Fire is essential for conserving these species for example, in grasslands. On the other hand, the same fire has a negative impact on moist broadleaf forests. Thus fire actually helps certain species and harms other species. By allowing fires to burn we support the fire-dependent species. By stomping out fires we support fire susceptible species. Fire is not “bad” for all plant and animal species.

The United States Fire Service was previously trying to stomp out every forest fire. That has changed now. In a USA Today report, a fire management officer of Payette National Forest, commenting on more than 150 fires that burned about 70,000 acres, said “It was a real long season, but we got some nice fire effects”. “We’re pretty happy with what we got,” he added.

Reason is that these “small” fires have burnt up the dead combustible material and prevented a bigger conflagration. Thus, the US Forest Service is becoming more comfortable in co-existing with fire rather than trying to stomp out every fire with all the men and material at their command. Their reasoning is that fire clears out underbrush and small trees, and keeps small fires from growing into the kind of large, catastrophic blazes. They now say that the decades of fighting fires aggressively was a mistake because it allowed forests to become overcrowded and ripe for fires that are nearly impossible to control.

Dr S P Sati of HNB University at Srinagar, Uttarakhand says that a system of “controlled burning” was practiced in the forests of Uttarakhand during colonial times. “Fire lines” were made. Undergrowth was cleared along the periphery of a specified area so that the fire did not spread beyond the fire line. Then the designated forest was set on fire. This led to clearing of the undergrowth and prevented large fires. The Forest Department has abandoned this scientific method, it appears, as a cost cutting method and pushed the forests into huge fires.

The devastation seen in Uttarakhand this season may be due to such buildup of unburnt combustible material. The choice before us is to burn the dry material regularly and save the trees; or to allow the same to accumulate until it becomes a devastating and devours the trees as well. Women of my village have understood this grim reality from traditional knowledge hence they burn the grass every year. They may have helped in the prevention of large fires by lighting these small fires. The recent fires have perhaps become big because the small fires were not lit as frequently as was required.

Another contributing factor is the extensive use of explosives for the making of roads, rail lines and hydropower projects. Vibrations from these blasting cause fissures in the aquifers and the water drains out. This leads to drying of water sources, depletion of moisture in the topsoil and reduction in the living grasses and shrubs in the forests. The resulting dryness provides an ideal ground to develop into a big fire. An additional problem is that the Pine Forests are hugely fire prone. The pine needles catch fires easily. The pine trees can withstand the fire but it engulfs the broad leaf mixed forests nearby.

Commentators have blamed timer mafia for the fires. I can say from personal knowledge that illegal large scale timber felling is not taking place in the State. This is good sensationalism but far from truth. Blame is also being laid on two successive years of drought, but this is a natural happening. Blame is being laid on global warming. Indeed this is a contributing factor but we have to tighten our belts to face this. We must help the forests face the warming rather than contribute to the problem by promoting the use explosives and planting pine forests.

The way forward is first to commission a study regarding the benefits and costs of “controlled firing” that was practiced earlier. Then implement this policy in cooperation with local people. Fire lines should be made across the forests before the onset of the summer season to prevent devastating fires from spreading. The use of explosives must be banned in the hills. And all pine forests must be replaced with mixed forests.

Author was formerly Professor of Economics at IIM Bengaluru