The charkha has come full circle 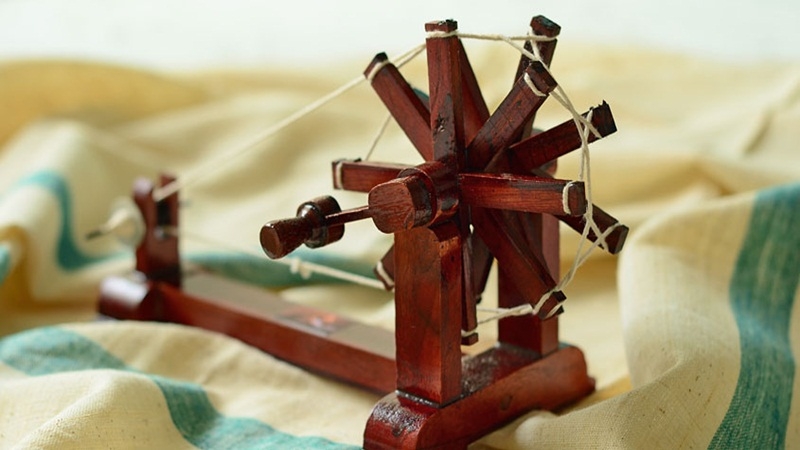 The charkha has come full circle. Traditional Indian fabrics, decimated first by brute force and then by manmade fibres, may be the best bet to save our planet. Plastic microfibres from synthetic garments and furnishings, research studies say, has contaminated drinking water, sea-water and marine life to a frightening extent, threatening fragile eco-systems even on the ocean-bed.

‘Beat Plastic Pollution’ was the theme of World Environment Day 2018 and one of the subjects under review was microplastics. The major microfibre pollutant in sea salt is polyethylene terephthalate, better known as polyester. Invented in 1941, it was popularised in India by the late Dhirubhai Ambani aka “The Polyester Prince”. Acrylic is even worse than polyester for the environment, studies say, because it sheds 1.5 times more particles per wash than polyester and five times as much as polyester-cotton.

All textiles shed microfibres, but natural materials like cotton, linen, silk, cashmere, hemp, jute and wool break down much faster – unlike plastic fibres, which stick around for centuries. As a result, plastic microfibres are now ubiquitous. The integration of plastic fibres into ecosystems has already impacted animal life. We know that marine creatures – from plankton to mussels to fish – are being choked by plastic, just as plastic bags block the guts of stray cows. What does it mean in terms of human health? Nobody knows and scientists are only now trying to find out.

In 2015-16, sales of khadi and village industries shot up by over 14 per cent to Rs 37,935 crore, while sales of khadi fabric and garments jumped 29 per cent. Regular FMCG companies were complaining of sluggish growth at the time. The trend has continued, with the khadi industry consistently recording growth figures above 20 per cent.

The Khadi Village Industries Commission (KVIC), narrowly avoiding a tie-up with Baba Ramdev’s Patanjali, has lately sought partnerships with big firms like Fabindia and Raymond, to meet the crying need for a design upgrade in ready-to-wear khadi.

The brand itself became fashionable at the turn of the millenium, when NDA I inducted the IIT-trained Dr Mahesh Sharma to steer KVIC. Khadi soaps, cosmetics and edibles became must-haves, but ready-to-wear languished for lack of design inputs. NDA II is seeking to bridge that gap. Raymond has been aggressively promoting its khadi ready-to-wear range and many high-profile designers have introduced it in their collections. The fabric of the poor is now a status symbol for the rich.

Middle-class women once wore their polyester sarees with pride, but now will not be caught dead in ‘cheap’ synthetics. Draping cotton in general and khadi in particular is a signal that the wearer doesn’t care about cost, durability or high maintenance. Those concerns are for the less well-to-do. That said, all kudos to Smriti Irani’s #Iwearhandloom campaign, because the handloom industry can do with all the help it can get.

The khadi brand has a special cachet, given its association with the freedom movement and the Mahatma. Like most things Gandhi, it was consigned to the dustbin in the urge towards industrialisation. The iconic charkha was confined to the dusty, musty corridors of Gandhian institutions, with only its symbolic value remaining. Khadi or poly vastra (an unhappy blend of polyester and khadi) became a kind of uniform for politicians and social workers, a token affirmation of nationalist and/or Gandhian principles. At public functions, garlands of hand-spun yarn for VIPs were replaced by marigolds and money, which was understandable, because ‘Gandhi’ had become a euphemism for high-value currency notes.

Khadi’s impressive resurgence, however, has more to do with growing environmental consciousness and concerns about human health than age-old associations. Khadi fibres are hand-twisted, which makes the fabric ideal for all weather conditions – hot, cold or humid. Yes, it crumples easily, requires frequent washing, is expensive and not easily available off the rack. But it breathes well, is skin-friendly and gets softer with each wash.

The challenge now is to make khadi, or at least handloom – which uses mill-made rather than hand-spun yarn – affordable and accessible for all. The top-down approach may work, as the less privileged follow the rich in adopting natural or blended rather than entirely man-made fibres. The best part is that ‘khadi gramudyog’ products, which are not produced in industrial plants like regular FMCG goods, but by more than seven lakh household units and social entrepreneurs, most of them run by women. A classic example of production by the masses, for the masses.