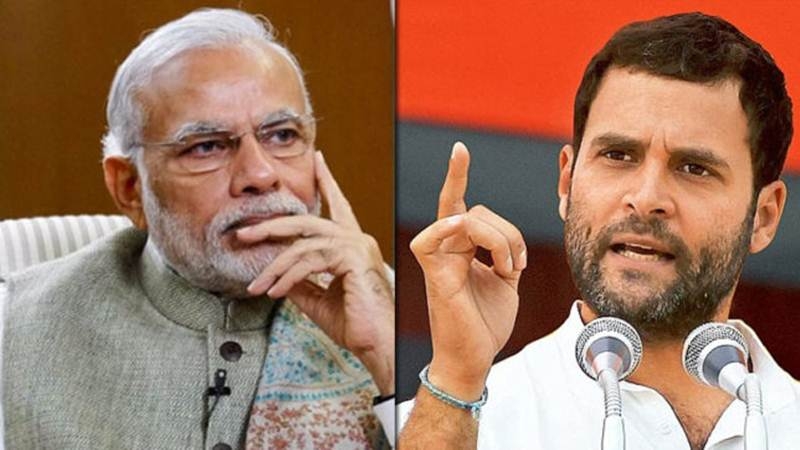 WHEN  the Anthony committee pointed out that the Congress rhetoric on communalism was widely perceived as minorityism, Rahul Gandhi still didn’t get it. He continued to believe that characterising the BJP as an upper-caste, anti-poor, communal party was the way to go.

On the cusp of 2018, with Rahul Gandhi at the helm, the Congress is strangely buoyant. The win in Punjab at the beginning of the year did less to revive morale than the loss in Gujarat at the end of 2017. This new resolve can be attributed to the party president’s apparent battle-readiness and willingness to discard old shibboleths and loyalists.

The most significant aspect of the new feel Congress is the slide to the right of the political spectrum. After decades on the centre-left, it now shows signs of wanting to reclaim the centrist space. The shift is discernible in its display of religiosity and subtle distancing from the minority community, although a clear-cut nationalist alignment is not yet evident.

What prompted this change of locus? For an idea, let’s dial back to October, to a speech delivered by Finance Minister Arun Jaitley. It’s almost possible to imagine that Rahul’s advisors took their cue from him. Jaitley observed that in the last 10-15 years, the Congress had abandoned the centrist space which has now willy-nilly been occupied by the BJP. Laying out the political scenario, he described the progressive shrinkage of the Left, which has ceded space not just to other parties but to the ultra-Left. Meanwhile, Islamist forces have gathered strength across the world as Sufism is displaced by Wahhabism. The convergence of the ultra-Left and Islamist forces and the ideological agenda they promote, has left its fingerprints across India. This convergence represents the ideological antipole of the BJP.

The Congress of today, on the other hand, presents itself as a cheerleader of the ultra-Left-Islamist convergence, Jaitley said. “If the JNU episode had occurred in the time of Indira Gandhi, Rajiv Gandhi or P V Narasimha Rao, would any Congress leader have gone there?”, he pointed out, adding that the Congress of yore was willing to stand against terrorist forces, be it in Punjab, the North-East or Kashmir. That is no longer the case.

Jaitley’s remarks may sting, but there’s no denying that in public perception, the BJP beats the Congress hollow on the subject of national security. The A K Anthony Committee, appointed by the then Congress president Sonia Gandhi in the wake of the 2014 Lok Sabha debacle, was brutally frank: the grand old party’s secular credentials were in doubt, the report said, arising from blatant minorityism. By constantly harping on a special status for the Muslims, the party leadership had alienated the majority community. The stated policy of minority appeasement had hurt the Congress electorally.

The Congress drift to the left was discernible under Sonia Gandhi 15 years ago, as she searched for allies among the socialists, like Lalu Prasad Yadav and Mulayam Singh Yadav. More so, when she formed a government in 2004 with the outside support of the communist parties. The increasing footprint of the BJP drove the Congress further to the political left, until it all but squeezed the party out of the centrist space. By 2014, the only agenda the Congress had left was ‘secularism’, as opposed to the ‘communal’ BJP. In other words, the Congress defined itself in anti-BJP terms, at a time when the BJP was defining itself as pro-development, pro-governance and anti-corruption.

When the Anthony committee pointed out that the Congress rhetoric on communalism was widely perceived as minorityism, Rahul Gandhi still didn’t get it. He continued to believe that characterising the BJP as an upper-caste, anti-poor, communal party was the way to go. The turnaround came with Gujarat. For Rahul to declare himself a janeu-dhari Shivbhakt was a bold move, given that his paternal grandfather was Parsi, but prima facie seems to have worked.

Of course, Rahul cannot mandate a drift too far to the right, for fear of annoying allies and potential allies like the Rashtriya Janta Dal and the Trinamool Congress. This might explain why Rahul revived the ‘politics of hate’ rant in his maiden speech as Congress president (by which time the Gujarat campaign, in the course of which he avoided the subject, was safely over).

In Karnataka, where elections are due in May 2018, Chief Minister Siddaramaiah is already displaying his ‘Hindu’ credentials, pointing out that he has ‘Ram’ in the middle of his name. With the rise of ‘Hindutva’ forces in South Karnataka, the Congress clearly fears a polarisation of the electorate. Hence, the effort to characterise themselves as pious and practicing Hindus rather than as ‘the sons of Tipu’. In the classic video game, Temple Run, the winner seeks to collect the maximum number of coins. Rahul’s Temple Run in Gujarat may not have yielded the winning haul, but 2018 offers eight opportunities to make good, in Karnataka, Meghalaya, Mizoram, Nagaland, Tripura, Chhattisgarh, Madhya Pradesh and Rajasthan. Game on.

The author is a senior journalist with 35 years of experience in working with major newspapers and magazines.  She is now an independent writer and author.