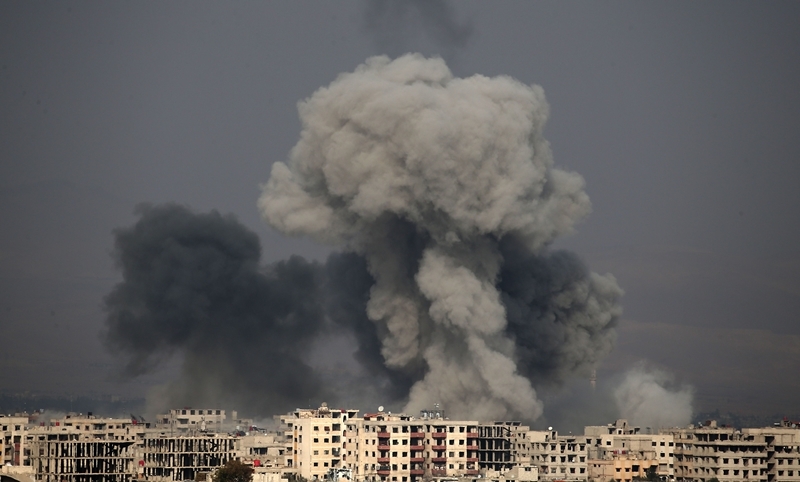 The world might be staring at the return of the Cold War. The alleged chemical attack by the Assad regime on the rebel fighters in a suburb of Damascus last week has set off fresh hostilities between the leaders of the West and the Russians. President Donald Trump ratcheted up the rhetoric, tweeting that US missiles were ready to rain on Syria in retaliation of the poison attack which killed children, women and men alike, leaving 500 people gasping for breath in ill-equipped medical facilities.

Even as the security and strategic experts were still pondering over the best US response to the chemical gas attack, Trump took everyone by surprise, tweeting, “Get ready Russia, because they will be coming, nice and new and ‘smart’. You shouldn’t be partners with a Gas Killing Animal who kills his people and enjoys it!” Of course, Trump was being Trump, but the seasoned security experts will be breaking their heads against the hard walls in the White House at the sheer impulsiveness of the President who is clueless how such matters of high strategic value fraught with grave national and international consequences are handled.

The White House Press Secretary sometime later sought to underplay the presidential tweet, saying that the US response to the Syrian aggravation was still being worked out. However, the situation in Syria has become far more fraught. Unlike last time when Trump ordered missile strikes against Syria following a poison gas attack on the IS rebels, Russia has threatened to intercept the incoming US missiles and attack the sources from which these were emanating. In other words, the Syrian standoff could blow into a full-blow global crisis. As it is, Vladimir Putin is behaving like a cornered bull ready to counter-attack after the British-led expulsions of Russian diplomats by a large number of countries. The tit-for-tat expulsions by Russia were only a face-saver because the global community at large seems to have put Russia in the dock for the potentially fatal never gas attack on the former Russian double-agent in Sainsbury last month.

Given his felt need to project Russia as a strong power, ready to take on all its traducers, Putin feels obliged to respond to the West whenever he feels it has been challenged. Indeed, his foray into Syria, which, admittedly, followed Obama’s ill-considered decision to scale down the US role in all such conflict zones, was meant to reflect an image of a strong Russia. Now, that Trump is threatening reprisals against ‘Animal Assad’, Putin will lose face should he watch from the sidelines even as the US rains missiles on his new-found ally. Hence, the warning by the Russian generals that this time they would retaliate. Should it come to a full-blown fight over Syria, the threat of a wider conflagration cannot be entirely ruled out, especially when such situations can unknowingly spiral out of control.

As it is, Putin feels that the West is out to isolate Russia, what with continuing post-Crimea sanctions in place and the expulsions of its diplomats following the Sainsbury attack on the former Russian double agent and his daughter. Besides, Syria is not alone. It has the backing of Iran and might attract the sympathy of the wider Islamic world should Trump go flat out to retaliate against a gas attack which the Assad regime complains it did not launch. The Saudis, on the other hand, would like Trump to do as threatened because more than Syria they have a running feud with Iran which is on the verge of going nuclear. The ongoing armed conflict in Yemen where Iran is a huge proxy presence against the Saudis further complicate the scenario. In the meanwhile, the Syrians have moved their aircrafts to Russian airbases. The tension between the old Cold War antagonists, triggered by the events following the Sainsbury chemical attack last month, has now reached a boiling point, with the US gathering support of key Nato members, while Russians have vetoed a UN resolution condemning Syria for the poison gas attack. Unless both sides pull back from the brink and tone down the angry rhetoric, the world could be on the verge of a military standoff over Syria which could soon engulf others in its deadly grip.