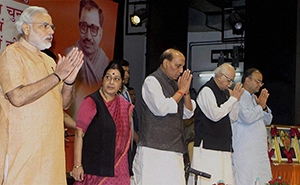 It is almost as if the party’s leaders, sensing an opportunity to come back to power after a decade-long hiatus, are unable to contain themselves

It is one thing for the BJP to announce its prime ministerial candidate well in advance. But it is quite a different proposition when leaders in different states are virtually marketing other BJP leaders as future deputy prime ministers in their chosen Lok Sabha constituencies.

This game began in Amritsar. A crystal-gazing Punjab Chief Minister Parkash Singh Badal told the voters that they were not just voting for an ordinary member of Parliament. In what appears to be a plausible scenario, he told them that Jaitley could well be the next deputy prime minister as well as finance minister. On his part, Leader of the Opposition in the Rajya Sabha  Arun Jaitley  played down this reference by Badal as a part of campaign speech-making.

But it has to be appreciated that such comments do weigh on the voters’ mind. Or else, the Madhya Pradesh tourism minister, Surendra Patwa, would not have chosen to introduce the Lok Sabha leader of opposition, Sushma Swaraj, as future deputy prime minister in her constituency Vidisha. Patwa is an experienced practitioner of the art of power politics, carrying forward the lineage of his uncle, the former chief minister Sunderlal Patwa.  The Swaraj-Jaitley rivalry is not lost on him. He knows that if Jaitley can lay stake to the deputy prime ministership in any future regime, then Swaraj also has the same credentials and can logically stake her claim for the same position.

These two campaign speech episodes essentially bring out the real clash of ambitions in the BJP.  It is almost as if the leaders who are sensing an opportunity to come back to power after a decade-long hiatus are unable to contain themselves. They are not only eyeing their share, but are also keen to ensure that others do not come anywhere near it.  In a less hyped media environment, this could be described as counting one’s chickens before they are hatched. But currently, this has got the legitimacy of clever power play, and effective strategy.

There is another significant, qualitative change in the BJP’s internal environment. This is the near veneration of an individual – Narendra Modi, with the sanction of its ideological fountainhead, the RSS. This is not a departure that can be rationalised on the basis of political compulsions.

This must be viewed in the backdrop of the fact that for nearly 88 years – after its being established in 1925 – the RSS has very assiduously cultivated a cult in which the veneration of the individual is a taboo. This is to the extent that it has adopted a non-person – the saffron flag as its guru. Perhaps, it was after realising that it had gone too far, the  sarsanghchalak, Mohan Bhagwat accepted that the slogan ‘Har Har Modi’ had to be withdrawn. But that he had to be prodded into realising that this gross error is also a giveaway. As ipso facto sarsanghchalak, the protector of all that is sacred to Hindus and the torch-bearer of the RSS credo against the veneration of an individual, he should have instinctively rejected any such suggestion. However, this did not happen. The reason is not far to seek.  Bhagwat too is gripped by the same power-grabbing ambition that seems to be driving the entire BJP. He enjoys not just meddling, but micro-managing the affairs of the BJP.  No longer is the Sangh, the detached friend and philosopher and guide. Soon, it would degenerate into one of the factions within the BJP.

Individual battles, personality clashes and jockeying for positions is an accepted part of any power structure. So, the Modi versus Advani, the Jaitley versus Swaraj, or the Joshi versus Modi tiffs are not unusual. Indeed, these are the spice of political life. But then, there is something called decency. If this virtue is sent packing, then the entire game loses its charm.  All these incidents leave a bad taste in the mouth, especially when these unseemly clashes take place before even the party has come to power. Who knows what would be the cumulative effect of all the self-goals that are being scored by the various elements of the Sangh Parivar?  Right now, riding high on the euphoria generated by the opinion polls, no one has the time to pause and reflect on such thoughts that could restrain the flight of imagination.

There is no debating the fact that there is an anti-Congress mood in the country. The reasons can be debatable. But then there is no overlooking the fact that achieving the 272+ mark is like climbing the stairs. There is no elevator route. Each constituency has to be won like the trench fight in man-to-man combat. In such a fight,everything matters, and sweeping declarations count for very little.

The BJP leaders would have served their cause well had they deferred this clash of ambitions to a post-poll situation. In the first place, they would have avoided this ugly spectacle, and also added a modicum of credibility to their promise of providing a viable governance alternative.

It is not that the Congress does not suffer from this malaise. In fact, it is a chronic patient of this disease. But then the high command structure, the euphemism for the super power status of the Congress president Sonia Gandhi, helps it deal with this problem in an effective way. Those who dare to challenge her authority simply fall by the wayside.

The problem for Modi is that he aspires for the same high command status. He gives it a tongue-lashing on a daily basis, but desperately wants it for himself. This is the essence of his ‘son of chaiwala’ versus ‘shehzada’ argument. But the sooner he realises that if his party wants to ape the Congress, then it can only be a poor imitation, the better it will be for him as well as the party. The people do not need a BJP that copies Congress, because they already have the Congress.