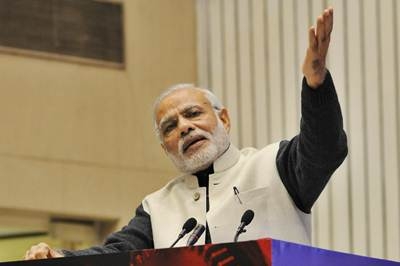 Now that the Narendra Modi government has changed the constitutional status of Jammu and Kashmir, thanks to the non-applicability of Article 370 of the Constitution to the sensitive border state since the fifth of August, the Centre and the security establishment has a lot to do to turn things around.

J&K, which included Ladakh, will now be two Union Territories which has been welcomed. Jammu, Kashmir and Ladakh were three distinct areas with the least similarity.

As the head of government, Modi's recent trip to Houston, Texas, the United Nations General Assembly in New York and meetings with US President Donald Trump was a success. At the same time the demonstrations recently in downtown Srinagar pilloried New Delhi while seemingly backing Islamabad indulging in terrorism as state policy.

The curfews and lockdown in Kashmir appear to have made the border and the security forces more vulnerable. At the same time National Security Advisor Ajit Doval has been camping in Srinagar closely monitoring the situation to keep things on an even keel. On his part, Modi focussed on getting his message across on the global issues encompassing the dangers of violent extremism and the imperative need to combat climate change.

The other day Kashmiris poured on to the streets in downtown Srinagar to understand the consequences of J&K losing statehood and special status. This assumes significance as J&K including Ladakh has since been split into two Union Territories. At the same they are acutely aware that Pakistan cannot match India's might.

Kashmiris also realise it is beyond Islamabad's capacity to undo the decisions of the BJP led NDA government 57 days back. The communications blockade has pushed the people to the wall. The administration firmly believes that the lockdown was necessary to counter the protests against its new J&K policy.

The Centre had anticipated protests by Kashmiri politicians against its new policy in J&K resulting in the deterioration the law and order situation. It had become apparent that such a situation could only be quelled with additional troops, preventive detention along with a communications blockade.

The challenges for the security forces is formidable. There is growing frustration among the people due to the communication clampdown. On the other hand, authorities are wondering what if things go wrong once the clampdown is lifted. That is bound to delay the process of normalisation leading to more frustration and anger among the people.

It is no secret Pakistan has a constituency of its own in the Valley. Though its size might have shrunk, its efficacy was evident a few days back on September 27. The intransigient neighbour is desperately trying to be a factor in Kashmir, though unsuccessfully, all these years.

Senior Congress leader Ghulam Nabi Azad who recently visited Kashmir after seeking the permission of the Supreme Court has warned of a huge crisis brewing there. He charged the Modi government with intimidation and suppression of facts compelling Kashmiris to resort to civil disobedience as a mark of protest.

In a newspaper interview, Azad claimed that a huge civil disobedience movement is on in Kashmir. Unprecedented anger not evidenced in the last 30 years is brewing in the Valley even as the Centre dissuaded the locals from meeting him. Azad added that the situation is no better in Jammu.

Amid all this it is widely believed that the Centre should reach out to the people and earn their confidence that the steps taken since August fifth is to properly integrate J&K with the rest of the country along with ensuring speedy development.

Pakistan Prime Minister Imran Khan's bluster on Kashmir and the threat of nuclear war is just going over the top. At the same time India cannot wish away questions about Kashmir in international fora. The only way to keep domestic issues within the country is to resolve them through internal dialogue and accomodation.

It has become imperative for the country's political and security establishment to turn things around in the Valley. Even as J&K remains on the edge, the state administration announced on Sunday the schedule for holding the second tier of the panchayat elections aimed at bringing about a semblance of normality.

The writer is a senior journalist and commentator.